In Sacramento, life can be a real drag—but in a positive way. The county is a haven for drag culture, with weekly shows and a deep-rooted scene many may not know exists. Drag culture carries some preconceptions—and misconceptions.

Traditionally expressed by male-identifying performers wearing women’s clothing, the art of drag is an exaggeration of gender expression. The performers may be gay, trans, nonbinary, afab, cis—it doesn’t matter—and they play with gender roles as a way to entertain audiences. That means you may see men in long gowns lip-syncing to pop divas’ biggest songs or women in exaggerated makeup and wigs playing roles that poke fun at gender stereotypes.

Drag is more than dressing up and getting onstage. The culture involves traditions and hierarchies, and underneath the big wigs and incredible makeup are big hearts focused on good deeds, including advocacy for education, health care and LGBTQ+ rights.

As a drag king, Clive Maxx (Miles Sykes) says he has to work harder to earn respect. “The culture of drag being put onto the TV and that people outside of the community are seeing is predominately cis men and 99% drag queens,” he says. That leads to a common misconception that drag kings—primarily female performance artists who dress in masculine drag and personify male gender stereotypes—are not as polished. “Even in the realm of the LGBTQ+ community, we aren’t immune to societal misogyny,” he says.

In fact, Clive Maxx spent shelter-in-place downtime perfecting his face makeup, which he says has evolved in the two years he’s been performing. It now takes two hours to finish—three hours from shower to stage. He’s also got a full-time job and a 5-year-old to care for.

Performing drag as a transgender man has been a liberating experience, he says. A particularly pivotal moment for him was the first time he removed his shirt during a performance. “I decided to wait until I was decently healed from my top surgery before my first [drag] performance because I wanted to be able to take my shirt off without having to bind,” he says. “A room of people screaming and cheering when you take your shirt off is the most gender-confirming thing I have ever experienced.”

When he’s not performing his favorite pop club hits and hip-hop and R&B songs a la Dua Lipa, Cardi B and Nicki Minaj, he’s focused on trans advocacy and education. “The drag world and the trans community often see a major overlap,” Clive Maxx says. “I think after performing and feeling the sense of gender euphoria, it can quite frequently lead to someone transitioning.” So, while some are using the drag world to promote their craft, others are finding themselves in those performances and exploring their own identities. Advocates within that space who mentor and teach can make transitioning or coming out easier.

WHERE TO SEE: FTLP on Mondays (co-host) and regular appearances at Badlands on various Friday and Sunday nights; Maxx Drag Show (host) on Twitch.

Drag performances can be synonymous with sex and shock. But not necessarily. “I don’t feel like there is always an innate sexual connotation,” says YAYAH (Camryn Nichols). “Especially for me.” She says she sees nothing wrong with that approach to drag—it’s just not the only way to be a drag performer.

YAYAH’s star power is bolstered by her killer voice. For five years, she’s been hitting the stage, slipping easily into “The 7th Element” by Vitas, “Ironic” by Alanis Morissette and “Cold Hearted” by Paula Abdul. With two albums and an EP, she’s a bona fide binary musician using drag to portray a larger-than-life persona. While she’s been in the drag space for several years, music came first. “I’ve been performing in bands since I was 12,” she says. “I grew up with a mom who was a touring drummer and spent a lot of my early years on the road with her and watching the entertainment industry from behind the scenes.”

YAYAH has some advice for people who want to do drag: Have a purpose—ask yourself why you want to do it—and play to your strengths, whether that’s singing, dancing, sewing or something else entirely. “Leave the ego s*** at the door,” she says. “Show a genuine interest in your community.” Use social media to carve out a space for your persona and compete in local pageants or competitions to get your name out.

Finally, be ready for some work. “Getting in drag takes me about three hours from start to finish, assuming I don’t pass out on the floor in the middle of getting ready,” says YAYAH. Makeup routinely takes her an hour or two for full drag, and selecting from the more than 100 wigs in her closet isn’t a quick decision, either.

For a performance art so laden with gender questions, YAYAH suggests audiences let that go. “Leave gender expectations behind and just enjoy the artist and their craft, regardless of how they were born or how they present.”’

WHERE TO SEE: The Callback Bar (adjacent to Punch Line Sacramento), first Tuesday of every month, for “Nightcap: Drag Cabaret”.

Hellen Heels (Jonathan Lopez) is a chameleon when it comes to drag. He says you never know what you’re going to get once he steps a sparkly high-heeled boot onto the stage. From funky upbeat dance tunes to big ballads, the tunes Hellen Heels has mastered definitely cover the pop-divas catalog. He can pull out Britney Spears and J. Lo (an accidental namesake) on the fly.

In his personal life, however, Hellen Heels has faced hardships. After coming out and facing rejection from his family, he has dedicated his adult life to helping others in the LGBTQ+ community adapt and get the resources they need. He works at the LGBT+ center in Stockton, where advocacy and education are cornerstones of his mission.

Every night, Hellen Heels can be someone new, and it routinely takes him three hours to get ready for a performance. With some health issues that have put a potential time clock on his ability to perform at this caliber forever, he goes all out every time he hits the stage.

In addition to being the only regular drag performer with The Darling Clementines (an inclusive burlesque troop featuring women of all shapes, ages and sizes), Hellen Heels developed the YouTube-based competition show “Into the Draglands,” which features local drag performers. “My mantra is: Drag is for everyone,” he says.

WHERE TO SEE: Co-host of “Makeup & Mimosas” (Badlands’ Sunday brunch show); regular performances with The Darling Clementines burlesque group; weekly appearances at Paradise in Stockton; “Into the Draglands” online competition (creator and host).

Crown-laden and extra fabulous, the court system for Sacramento area drag queens sounds like something akin to the royal family. What started 48 years ago as a way to promote gay bars and businesses has morphed into a nonprofit organization: The Imperial Court of Sacramento (a subsidiary of The Court of the Great Northwest Imperial Empire, Inc., which stretches from Santa Rosa to the Nevada and Oregon state lines). The emperor and empress elected each year raise money to help those affected by HIV and AIDS.

“These title holders saw the chance to help pay for rent, food, utilities and burials,” says Taryn Thru-U (Johnathan Cameron), a member of the hierarchy for 27 years. Money is raised through bake sales, drag shows and big events (including the annual coronation). Everyone is a volunteer; the cost of travel, outfits, jewelry and food do not come out of the nonprofit’s funds.

Taryn Thru-U has served as grand duke, emperor and empress, as well as president of the board of directors for six terms and vice president for one. Other titles are based on the British monarchy, including duke, duchess, prince and princess. Titles such as Mr. or Miss Gay Sacramento and camp titles that include “keeper of the keys” and “lady in waiting” are also awarded.

Taryn Thru-U has been a drag performer for 18 years. “There is a difference between being an artist that can create a look and produce a look, and a person who just purchases a persona,” Taryn Thru-U says.

By night, Taryn Thru-U performs local gigs and shows on the road around the country. By day, Taryn Thru-U is a case manager for Sunburst Projects, a nonprofit that works with HIV clients, assisting with both medical case management and therapy. 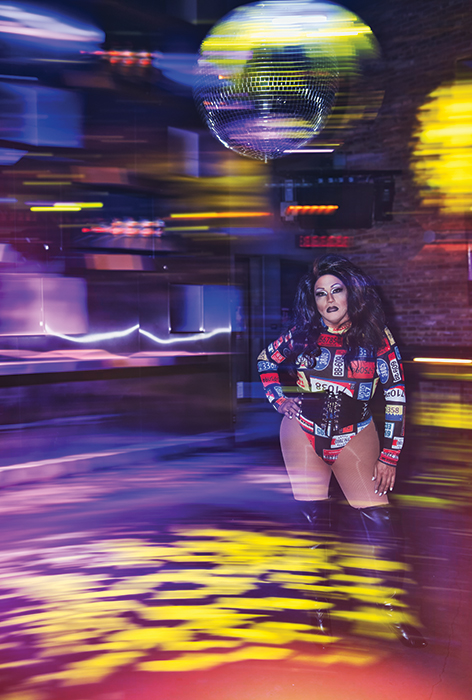