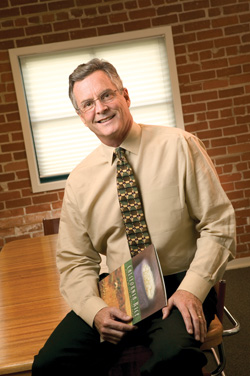 The next time you pop into the bakery aisle at Safeway and automatically grab the loaf in the blue bag because you know that’s the French bread—as opposed to the green bag, which contains sourdough—you’ll understand what Paul Page has been doing for a living for more than a quarter of a century.

No, he’s not a pastry chef. But he and his staff of 10 at the multiple award-winning Page Design, Inc. do spend each day cooking up graphic imagery that can be subtle, wild, hilarious or poignant—or sometimes all of the above, within the context of a single brochure or package. For every tastefully semi-anonymous bread wrapper there’s also the sexy, high-profile Chocoholics line of products he helped the manufacturer develop, including chocolate body frosting. (“Directions for use: 1. Light candles; 2. Open jar; 3. Offer paint brush; 4. Announce softly: ‘Dessert’s on me!’”)

Page, 52, belongs to that rare pantheon of designers who also are accomplished copywriters. In addition, he’s a good businessman—accounts include such national heavyweights as Mattel Toys and Reebok—and has managed to hang onto the respect of his competitors.

“If we don’t get a job that both of our firms have been going after, I’m happy that he gets it,” says Michael Dunlavey, who, with his wife, Lindy, founded The Dunlavey Studio around the same time that Page started his. “We’re good friends. I admire how he runs his business and that he’s done a lot of teaching and mentoring.”

Another of Page’s technical rivals, Lila Wallrich, co-owner of Wallrich Landi, was the beneficiary of that mentoring—sort of. Wallrich interned at Page’s midtown Sacramento studio, at 29th and S streets, in 1986, the summer before she graduated from California State University, Chico. “He was quiet, but intense, with a dry sense of humor,” she recalls. “I was too terrified to take much advantage of his mentoring, but impressed that he could juggle all the business stuff and still sketch.

“My interview started with him saying something like, ‘I don’t hire interns. I don’t see the benefit. Maybe you can prove me wrong,’” she continues. “I almost threw up. But he hired me on the spot. My boyfriend, now husband, who had driven me to the interview, had to drive around and kill time all day because Paul put me right to work.”

But if Page’s initial demeanor was something a bit icier than avuncular, Wallrich says he made up for it.

“He insisted upon paying me as an intern, unlike many studios, then and now. He said he expected a professional attitude and work product, and would pay me accordingly. It made a big impression and I’ve done the same with every intern I’ve hired since.”

Wallrich also was impressed by Page’s personal kindness. “He was compassionate,” she says. “One day on an errand, I ran a stop sign and totaled my car. Paul was there in minutes to calm me down and drive me home. I still feel embarrassed about it but grateful for the way he treated me like a valuable human, not a bungling intern.”

Fellow design studio owner Bob Rakela has known Page on a professional basis for years. Still, Page’s persona is elusive to Rakela. “I know that his standards are very high, and I admire his work. But I can’t honestly say I know much about him as a person, even after all these years.”

By now you’ve probably guessed that Paul Page is capable of emitting a variety of vibes. One of his current clients, who asked that his name not be used, says, “When he first came to work for us I just didn’t see how such a cold fish was going to be able to produce the warm image our campaign required. But the more I got to know him, the more I realized that when I thought Paul was being cold, he was actually listening to what I was saying and figuring out how to fit it all into the project. I think I was too used to people gushing all over me, but not producing anything worthwhile. I also found out, in a very short time, that Paul is actually a very warm, very caring man.”

At an interview in his (predictably) light-filled studio, Page isn’t entirely enigmatic. Tall and runner-trim, he bears a striking resemblance to the equally fit-looking CNN reporter Jamie McIntyre. His speaking voice is at once emphatic and intimate—no doubt an asset for someone who spends a good deal of his professional life presenting his and his staff’s designs to conference rooms filled with skeptical clients. But Page also is disarming. “I think my clients like me because I make it clear to them that I respect them,” he says. “I understand my business—but I recognize that they understand their businesses, far better than I ever will. I see my role as being there to help them tell their story a little better than they might know how to—because, after all, that’s what I do for a living.”

He says that a common mistake made by some designers and marketers is “forgetting that they’re there to be an extension of the client. I don’t do all of this work to please only myself. I’m a little like a tailor: I can make a beautiful suit, but the customer is the one who’s going to have to wear it. It had better be a good fit.”
Page Design creates print advertisements, annual reports, brochures, catalogs, displays, identity packages, actual packages (remember the sourdough), publications and websites. For the Chocoholics line, whose Stockton-based owners initially hired Page to invent a company logo and label designs for their chocolate toppings, Page came up with the body frosting (and racy label commentary), a top-selling board game (“Strip Chocolate”) and, also presumably for adults—or for kids you may want to keep an eye on—a chocolate voodoo doll. (Slogan: “Now Revenge Is Sweeter Than Ever!”)

The runaway success of the Chocoholics brand shouldn’t imply that Page Design is a one-note studio (that note being the G-string). The company is a lot more versatile than that—and, when called for, downright cuddly. With an edge.

Exhibit A: When the area’s venerable Dome Printing sought to ramp up its visibility, it turned to Page, one of its loyal customers, for help. Rather than take the familiar route of designing a brochure that emphasized the company’s technology or size, Page and his crew devised a publication that spoke to the emotional seesaw on which a print shop’s customers find themselves as they fret, hope and pray that their big-ticket project comes out as envisioned.

On the front cover of Dome’s brochure is an extreme close-up color photo of a crying infant, and the words, “Your job is your baby.” On the back cover, the same baby is seen, also in extreme close-up, grinning with delight. The text reads, “Your job is our baby.” The Dome logo, contact numbers and address appear, in small print, at the bottom of the page. But when you take a closer look at the baby’s face, a bit of not-quite-subliminal advertising appears: At the corner of the beautiful, blue-eyed baby’s irises, those tiny pools of reflected light are actually the multicolored Dome logo.

Exhibit B: For its 2001 annual report, Bio-Rad Laboratories couldn’t settle on a single theme since the Hercules-based firm was equally proud of its sales and its industry leadership (in functional genomics and specialty diagnostics; there will be a short science quiz after this article). Page designed a brochure cover with an embedded, manually turnable dial—in essence, a mini-wheel of fortune—that allows users to select their own theme as it spins into place (e.g., “Record Sales: $817.5 million”). Meanwhile, along the dial’s outer rim are key words about the company’s specialties or accomplishments.

“I like it when I can make everybody happy,” Page says—then adds, deadpan, “I’m not sure when that will actually happen, but I know I’m going to like it.”

Page—whose ad designs appeared in the likes of Rolling Stone and Playboy magazines when he was still in his 20s—has been married for 26 years to Claudia Buck, the managing editor of California Journal and a former Sacramento Bee reporter. They live in Land Park, just minutes from their workplaces. Their daughter, Emily, is majoring in journalism at the University of Washington, while son Cameron is in the construction management program at Cal Poly San Luis Obispo.

Page remains circumspect about the future of his studio, though he allows that in the next few months he’s expecting to corral “some significant work” that may boost his national standing. “The way I look at it,” he says, “I started my studio 25 years ago without a real plan of what was going to happen. And it’s gone better than I ever expected it to, without that plan. So I think I’m just going to stick with that plan, which doesn’t exist.”

All in all, not a bad design.