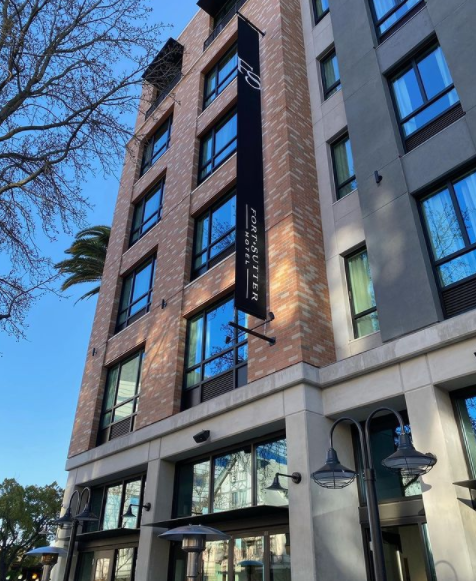 Randy and Stacy Paragary’s new boutique hotel will open Monday, Jan. 18, on the site of the original Cafe Bernardo in midtown. It’s been under construction for more than two years.

The six-floor Fort Sutter Hotel has 105 hotel rooms plus a lobby bar and a brand-new Cafe Bernardo restaurant. The project cost $28 million.

The hotel is part of the Tapestry Collection by Hilton, a group of independently owned, upscale hotels that includes properties in New York City, Washington, D.C., San Diego, Salt Lake City, Madrid and Paris. The Paragarys are Hilton franchisees.

The hotel is located at the corner of 28th Street and Capitol Avenue, across the street from Sutter Medical Center and next to B Street Theatre’s The Sofia. Randy Paragary had been talking about putting a hotel on that corner for 20 years, according to his wife, Stacy. The area has been under construction for almost that long, between the nearly $1 billion medical complex, a nearby hospital parking structure and the theater. Paragary worked out a 50-year deal with former Sutter CEO Pat Fry to let hotel guests use the parking garage. The only hotel in midtown, Fort Sutter will provide convenient lodging for family members of hospital patients and visiting doctors. The average room rate will be $160.

Because they are new to the hotel business, the Paragarys knew they needed to partner with a big brand. They interviewed major hotel groups, but most required them to incorporate the hotel’s own restaurant brand, while they wanted to put a Cafe Bernardo in the project. It was “thrilling to us,” Randy said, when they discovered Hilton would let them do it their way. As franchisees, they operate under the Hilton corporate umbrella, which supplies reservation services and allows guests to get points through the Hilton HHonors loyalty program. 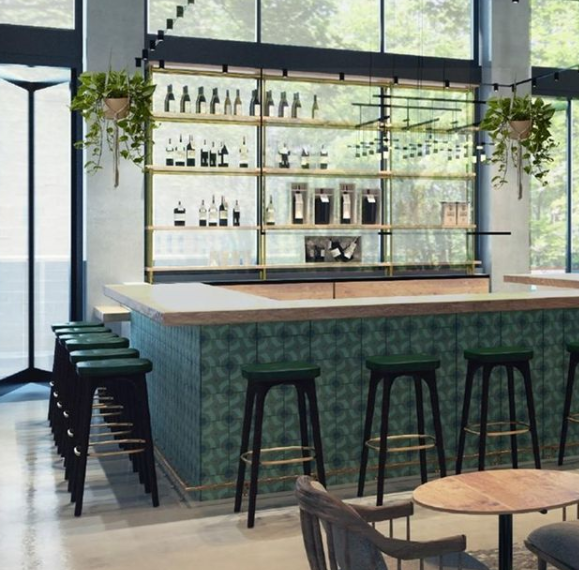 Sacramentan Ron Vrilakas was the architect for the project, which has a simple, modern brick-and-glass façade. Stacy Paragary oversaw the design. She describes the hotel lobby’s vibe as “California-Scandi,” with updated versions of midcentury-modern furnishings in masculine shades of brown, gray and cream. A massive, floor-to-ceiling fiber-art installation separating the lobby from the bar looks like a wall of oversized macramé.

Works by five local artists, curated by Micah Crandall-Bear, are featured throughout the hotel. Each floor of the hotel spotlights a different artist, with prints of their work hung in the hotel rooms and hallways. Guest key cards also feature representations of the artists’ works. In addition to Crandall-Bear himself, the featured artists are Pat Mahony, Kim Squaglia, Raphael Delgado and Susan Tonkin Riegel.

Some of the upper-story rooms have views of the Capitol, the cathedral and downtown. Others look upon four century-old palm trees outside the hotel entrance on 28th Street. The lobby-level bar is named Four Palms after the trees.

Because of the state’s pandemic closure rules, the bar won’t be open to the public when the hotel opens next week. But Cafe Bernardo will be open for takeout and room service. The menu is the same as at other Cafe Bernardo locations—a selection of salads, sandwiches, burgers and entrees, plus breakfast items. Open all day, the cafe will offer counter service at breakfast and lunch and table service at night.

Because of the pandemic, the hotel is likely to remain well under maximum occupancy for a while. This time last year, hotel occupancy in Sacramento was at 80 percent; now it’s 30 percent, according to Randy Paragary. He’s hoping that number to increase by the summer, as the vaccine is rolled out, the spread of COVID-19 slows and people resume traveling.