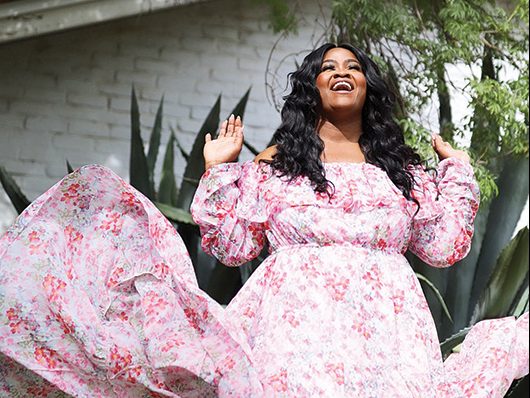 Melinda Watts is a singer, a worship leader, an influencer and a mom.

Getting her start at a young age in church, Watts knew in high school that she wanted to pursue singing as her full-time work. Today, she’s living her young dream, traveling around the world to sing and lead prayer.

Watts performs at festivals, including the upcoming Juneteenth Festival, June 17–19 at William Land Park. She’s also performed at jazz festivals in Sacramento and weekend services at Midtown Church (where she is a worship leader).

“My music style is more like gospel and contemporary music,” Watts says, adding that her favorite music is soul, jazz and a bit of rock. “It’s kind of like a jambalaya of styles mixed together.”

In 2021, Watts hit Broadway, taking on a production with gospel great CeCe Winans. Since then, she’s been in Austin, Seattle and Virginia, performing original music and beloved gospel tracks. In summer 2021, her daughter Lyric, 14, accompanied her on a South African tour. This summer, they’ll likely be performing as a duo in Brazil. “I have a pretty extensive travel schedule,” Watts says.

Her music is also available online on any streaming platform including Apple Music and Spotify. Her Christmas single “Wanna Love You (This Christmas)” includes a music video available on YouTube; she’s also got a new album in the works slated for a summer release.

“I’m really excited to be able to share this with people,” she says of her upcoming album. “It’ll be a mixture between worship and Christian music along with pop.”

While performing live is officially Watts’ 9 to 5, she also has a broad social media presence—more than 25,000 people follow her as she posts about her life as a mom of four, fashionista, singer and more.

“It’s almost like it’s built in,” Watts says of balancing her musical career with social media influencing. She says she isn’t doing a lot of extra work to create her brand; she’s simply sharing what she would be doing anyway, whether that’s getting her kids dressed in the morning or traveling with her family.

“I get to help people,” she says. “I sing to help people’s lives . . . with influencing, it’s the same.” She’s sharing brands and products that make her feel good. “It’s really a cool way to show my whole life.”