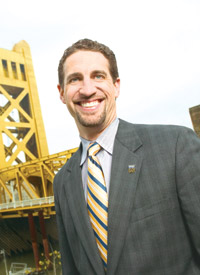 Matt Mahood, the 39-year-old president and chief executive officer of the Sacramento Metropolitan Chamber of Commerce for the past three years, could well be this region’s über-booster. This is no mean feat when you consider how many organizations and individuals devote their bodies, souls, budgets and mission statements to the marketing of this six-county area (to name a few: the Sacramento Convention & Visitors Bureau, the Sacramento Area Commerce and Trade Organization and the Downtown Sacramento Partnership).

Yet Mahood has steadily emerged as the go-to guy by shifting the chamber’s focus from the purely promotional to the out-and-out political. Office seekers and initiative drivers now make the chamber’s modest downtown offices at Seventh and I streets one of their first stops on the campaign trail. “Our great strength is that we’re not only the convener of people and organizations,” Mahood says, “but that once we buy into their missions, we can also be their strongest advocate.”

While the chamber, which has more than 2,500 members, has evolved from being seen as a toothless social club for graying businesspeople to become a veritable kingmaker, neither characterization is completely accurate. As early as 1939, its members led the effort to build McClellan Air Force Base here. Eight years later it worked to establish California State University, Sacramento (then called Sacramento State College). The chamber was behind the very first Capitol-to-Capitol trip in 1971 (a cross-country lobbying effort to heighten Sacramento’s profile in Washington, D.C., and garner our region’s share of federal dollars), which has become the largest program of its kind in the country. Also, Perspectives, its day-long marathon of high-profile, mainly conservative speakers, is, in its 10th year, recognized as the largest public affairs forum in Northern California.

More recently, the chamber—through its political action committee, individual members and improvised coalitions—successfully supported the election of Susan Peters, former chairperson of the chamber, to the Sacramento County Board of Supervisors. It campaigned vigorously for the passage of Measure A, which renewed the county’s half-cent sales tax and could raise, over the next 30 years, $4.7 billion for transportation projects. And, most notably, the chamber has been one of the most vocal proponents of building a new arena, which would serve as a replacement home for the Sacramento Kings and a regional megaplex for sports and entertainment events.

Mahood says the chamber never officially endorsed the notion of the complex being located downtown. (It will likely be built next door to Arco Arena in North Natomas.) Even so, a number of prominent business owners or managers, less than thrilled by the prospect of being singled out for taxes to fund construction of the new structure, are still angry about it. “No one ever explained to me how a downtown sports center with its own restaurants was going to pump up my business,” says a downtown restaurateur who wishes to remain anonymous. “And you know why? Because it wouldn’t.”

“The chamber’s logo colors are black and blue,” Mahood says, “because we’re not afraid to get out in front on an issue and get beaten up. But I think we were misunderstood on this issue.” In fact, the chamber helped assemble a task force of local business leaders (including this magazine’s owner and publisher, Michael O’Brien) to study a variety of options for the new complex. Currently, the most popular option would have area landowners selling and donating parcels to sketch out the arena’s footprint and surrounding grounds.
Despite this high-profile, high-stakes activity, Mahood knows the staid image of the chamber persists in many people’s minds. “The Sac Metro Chamber is not your father’s chamber,” he says, paraphrasing the familiar Oldsmobile commercial. “We’re not the stereotypical chamber of rich old white guys making deals over cocktails.” He smiles. “Though I’d be lying if I said we were as diverse as I’d like us to be. But that takes time. We’re reaching out to ethnic chambers in a serious way, and we’re doing everything we can to broaden our membership. And we’ll get there.”

Mahood himself defies easy stereotyping. Married and the father of two young girls, he is a lean 6 feet 7 inches tall, with thick, dark hair and a recently added goatee. He looks and moves like a professional basketball player. “If I shaved my head, I’d probably look a lot like [former Sacramento Kings forward] Doug Christie,” he says. “I keep asking [Kings president] John Thomas for a tryout—though the truth of the matter is, I’m actually kind of a klutz.” And while he spends his workweek in meeting after meeting—with businesspeople, elected officials and community activists—Mahood says, “The key here is that all of these meetings are short. Otherwise, I couldn’t stand to do them. I’m not all that patient.”

His wife, Penny, and daughters, Alexa, 13 and Melina, 4, might dispute that. When he’s not loping in and out of meetings, Mahood is an avid outdoorsman who says he’s “seriously into bicycling” and “spending as much time as possible with my family. Maybe it’s because I’m still a relatively young man, or at least younger than a lot of chamber of commerce executives, but I’m not about to miss out on being a husband and father. You don’t get the chance to do this over, so I want to get it right the first time.”

Relentlessly sincere in conversation, Mahood has a habit of continuously using his long, expressive fingers to fashion imaginary quotation marks (often called air quotes) around much of what he says. Sometimes he does so to let his listener know that he knows he’s using a cliché; at other times, he seems to orally highlight his comments to offset his anxiety about “not being a very interesting guy.”

This could be one of the few things about which Mahood is mistaken. He was a business student at California State University, Hayward, when he went to work for United Parcel Service at its Oakland offices. Upon graduation, he shipped himself to management jobs at Federal Express, then at Burlington Air Express (which today is BAX Global). He was the first director of operations for Webvan, and had risen to the position of vice president/general manager of Northern California operations when the wheels fell off the grocery delivery service in 2000.

“I inherited a lousy business model when I got there,” Mahood says, “and my job was to implement it, not change it.” After Webvan closed, Mahood joined Kaiser Foundation Hospitals as a senior project manager. Before being recruited for his current job with the Chamber, a number of area businesspeople began to discover him.

One of those was Jeff Williams, owner and chief executive officer of School Innovations & Advocacy, a Sacramento-based administrative services and lobbying firm whose clients include nearly 70 percent of California’s school districts. “I liked Matt Mahood a great deal,” he recalls. “He interviewed for our chief operating officer job, and unfortunately I picked another guy who didn’t work out.

“What impressed me about Matt was his enthusiasm and charisma,” Williams continues. “He really took over the room when he was speaking. He clearly understood operations, but in addition, he was upbeat and had a fantastic attitude. After you listened to him, you thought you could accomplish anything. He also wasn’t afraid to get his elbows dirty and work. He seemed like a guy who had no trouble interacting and motivating anyone. Not hiring him was the biggest mistake I have made as CEO.”

In his three years with the chamber, Mahood has continued to impress. Jud Riggs, president and chief executive officer of Teichert, Inc., says that one of Mahood’s strengths is that he’s been “a businessperson as opposed to a professional industry association person.” Riggs also calls Mahood “an effective advocate for business interests in the region,” describing him as “a leader who is unafraid to speak up, while, at the same time, is very personable.”

Virginia S. Hinshaw, provost and executive vice chancellor at the University of California, Davis, agrees. “Matt is extremely well-informed about activities and contributions of partners, like UC Davis, in the business community. He demonstrates respect for all partners and helps all of us stay connected.”

For Florence Di Benedetto, who became the chamber’s chairperson in January, one of Mahood’s assets is his versatility. “Every one of us who comes into office has an agenda,” she says. “Mine is educating the work force. Another’s might be to focus exclusively on transportation. Matt manages to adjust without sacrificing anyone’s emphasis, which I think is pretty amazing.”

Perhaps even more so is the fact that under Mahood’s leadership, the Sacramento Metro Chamber, originally conceived as a fairly provincial, downtown networking and marketing group, has managed to insert itself into issues such as regional transportation planning and local issues in other jurisdictions—and has done so without offending members of the 40 or so other chambers of commerce in its neighboring counties. Asked if this is one reason the chamber continues to describe itself as metropolitan rather than regional, which might be more accurate, Mahood’s pale eyes flash and his ever-present smile disappears.

“Who says we won’t change our name?” he asks. Then he smiles. “Look, it’s time for us to redo our five-year strategic plan,” he says, “and all I’m saying is that in my business, you never say never. I think our relationships are strong enough for us to explore a name change. But at this point, that’s all I’m going to say about it.”

And therein may lie the secret of Mahood’s success: He’s one ubër-booster who knows when to clam up.