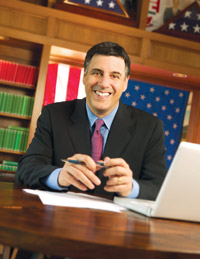 Consider first the incongruous nature of Kounalakis’ occupations. Not many journalists I know are aptitudinally inclined to manage corporations, nor would they ever want to, because of the highly addictive, DNA-embedded, high-octane kick they get out of telling a good story. And while some boardroom meetings have been known to work themselves up into a chair-throwing froth, that’s a Teletubbies tea party compared to the kind of adventure and intrigue most foreign-correspondent types crave.

In keeping with the yin and yang theme, consider, too, the fact that Kounalakis’ occupations are based on opposite coasts. (And you thought you had a bad commute.) But he insists that shuttling regularly between California and Washington, D.C. is more of an advantage than a disadvantage. That way, he is able to present a California perspective on national politics and policy within the pages of his magazine.

Kounalakis has the refinement and sophistication that come from hobnobbing with world leaders and being steeped in the centuries-old cultures of some of the world’s greatest cities (Prague, Stockholm, Rome: Kounalakis has lived in all three), not to mention the classical traditions of his own Greek heritage.

Cosmopolitanism balances perfectly against a fondness that Kounalakis and I share for America’s heartland, where I grew up and where he spent some time researching a book, which I discovered while interviewing him one February day at the sprawling brick Kounalakis home on the banks of the American River.

Kounalakis speaks five languages and “can handle” a sixth, yet these days more often than not can be heard reciting in simple English the adventures of Thomas the Tank Engine for the benefit of his sons Neo, 3, and Eon, 2. And sure, at 48 he cuts a dashing figure (part John F. Kennedy Jr., part Tom Cruise) in the best suits money can buy, but put him behind the wheel of a big rig and he feels right at home. Kounalakis’ Greek-immigrant father was a truck driver in San Francisco, and Markos himself spent some time driving construction vehicles and dump trucks as a way to pay off his Berkeley student loans.

“In my wallet, I still carry my Class A driver’s license,” he says proudly. “And if I may share a little secret, I don’t use the clutch for anything but first gear—like any good truck driver.”

Just as Kounalakis is a study in opposites, he also is an example of how a life made up of so many inconsistent fragments can form a perfect whole, as seamless as a marble but, in his case, as massive as a planet. Here is a man who has already lived an epic with its requisite tragedy and triumph. As a correspondent for Newsweek, he witnessed the overthrow of communism in East Germany, Czechoslovakia, Romania and Bulgaria, and the ethnic strife in Yugoslavia. And as a network correspondent for NBC-Mutual News in Moscow, he covered the fall of the Soviet Union.

“He has seen people die, families destroyed—horrible, horrible situations,” says his wife of five years, Eleni Tsakopoulos-Kounalakis. “As a result, I think he’s very in touch with how precious life is, and in particular how lucky we are to live in this country at this time in world history. So he just doesn’t get bent out of shape over little things.”

Perhaps that’s the secret to holding down two demanding jobs, in addition to his many philanthropic and family activities. In 2002, Kounalakis swooped in with enough cash and journalistic vision to save the ailing then-33-year-old Monthly. Now, almost three years later, circulation has jumped from 10,500 to about 30,000—not bad for a nonprofit, left-wing political/government “thought-leader” publication where the journalistic elite go to read good journalism, and Washington insiders go to read about themselves, but which holds little appeal for the time-starved, “just-give-us-the-headlines” masses. Readership is eclectic, to say the least.

“The magazine is an institution. I consider it, and I think many people consider it, a national treasure,” says Kounalakis, who spends about one week per month in Washington, D.C., but has a magazine office with staff in San Francisco. “There’s a great line in the movie Shattered Glass about The New Republic being the in-flight magazine of Air Force One. Well, I don’t think that’s too far from what the Washington Monthly is. It goes to the White House, it goes to Congress. Our magazine is regularly quoted in almost all the major media. We broke the story on (former Republican Cabinet secretary) Bill Bennett and gambling, which was a major story a couple of years ago and which no one else was really willing to touch.”

“He has that rare combination of high self-confidence, but with ego in check,” Glastris says. “He has a mind that plays on all fields. He can think like a journalist and like a businessman about domestic and international issues. He’s got this rare, wide life experience.

“He’s a real Greek—and I say that as a compliment. He loves to voice his opinion, he sees no personal achievement as impossible, he’s totally devoted to his family, and he loves to travel. He’s a citizen of the world.”

Kounalakis’ story is the archetypal American Dream. He grew up in San Francisco, the son of refugees of the Greek civil war, which ended in 1949.

“Shortly after that, they were able to come to the United States,” he says. “My father, to this day—he’s going to turn 82 next month—is a big, strapping tough guy. He fought in the underground during the second world war with the British on the island of Crete, and then in the Greek army during the civil war. So our family life was quite affected by questions of war and peace. There was an understanding that world events are not something that occur elsewhere on distant lands with foreign people—that they in fact occur in your own hometown.

“Every night at dinner,” Kounalakis continues, “my father insisted the evening news be on television. So we would sit around the dinner table and watch world affairs. My father would give a running commentary during the entire time. So this is the environment in which I grew up. There was always a paper in the morning and a paper in the afternoon, even though we came from very modest means. It was understood that it was the responsibility of a citizen to be informed.”

Kounalakis received his master’s degree in journalism from Columbia University in New York (he received his undergraduate degree in political science from U.C. Berkeley), then traveled the globe covering revolutions for both print and broadcast news organizations. It was dangerous work, which Kounalakis learned firsthand upon being attacked in Moscow. He ended up with a broken arm, broken ribs and a serious concussion.

“I don’t like talking about the event that occurred,” Kounalakis says, tiptoeing around his words the way you’d gingerly navigate a rickety bridge. “There are people who get hurt all the time who live there on a daily basis, and what happened to me was insignificant.”

A similar incident might have tipped the average person’s general world outlook from the proverbial half-full glass to one that’s been shattered over your head. (Which, in Kounalakis’ case, wasn’t too far from the truth.)  But in all his years of reporting, Kounalakis never lost his optimistic sheen.

He says, “Cynicism is real easy; it’s a lazy man’s journalism. Skepticism is healthy; it’s required in the profession. But the minute you cross that line, which is a very fine line, from skepticism to cynicism, then you’re not only doing the community a disservice, but you’re doing yourself a disservice. Because you’re essentially saying you’ve lost your hope in humanity.”

The attack in Moscow cut short Kounalakis’ career in reporting abroad. He returned to the United States, where he began writing about a different kind of revolution: the high-tech boom. He was approached by a book agent to write a book about Apple Computer, Inc.

“She asked me what I knew about technology. I said, ‘It’s foreign to me, but I’m a foreign correspondent,’” Kounalakis says.

The result was the 1993 title, Defying Gravity: The Making of Newton, which explores entrepreneurial risk-taking in the mercurial high-tech field. By 1999, he had another book under his belt,
Beyond Spin: The Power of Strategic Corporate Journalism, for which he did a great deal of research within the corporate suites of Silicon Graphics.

It was about this time that Kounalakis met his future wife at a dinner in San Francisco. They’d been introduced briefly several years earlier and never forgot each other, although Eleni pretended not to remember him out of embarrassment that he’d made such a strong first impression on her. The truth was, Eleni despaired at the thought of never seeing Markos again. This time, they were determined not to let each other go. Sharing both Greek heritage and a journalistic background (Eleni had some experience in reporting), the two immediately declared themselves soul mates and were married eight weeks later—first at the courthouse in San Francisco, for the legality, then in Istanbul, Turkey, the seat of the Greek Orthodox Church, for the pageantry. More than 150 guests, many of them Sacramentans, managed to turn out for the event on a mere three weeks’ notice.

For his part, Markos is happy to have found someone who understands his journalistic side, and with whom he can be a partner in business and philanthropy. The Kounalakises recently donated $1.2 million to Georgetown University to establish a chair in Hellenic studies. Kounalakis uses the knowledge he gained researching the high-tech industry to manage the operational side of AKT Development Corp., which he joined in 2000 and where his wife is the president. He leaves the actual practice of land development—as well as partisan politics, for ethical reasons—to Eleni, an avid supporter of the Democratic Party.

“You know, it’s rare to come across somebody who’s not in journalism who understands the mentality of someone who is,” Kounalakis says. “I don’t know what it is about our profession, but it’s different—not run-of-the-mill.”

Eleni, 39, not only understands that mentality—she finds it irresistible.

As ensconced as he was (and still is) in the concept of a free press as an agent of democracy—Kounalakis recently chaired a conference to help draft interim media laws in Iraq—nothing prepared him for the ultimate impact he would make on society: fatherhood. He and his wife are very much hands-on parents to their two young sons, and would rather juggle their work schedules so that one or both parents can be home than employ a full-time nanny.

“You’ll have to excuse me,” Kounalakis says upon losing a train of thought (a rare occurrence indeed). “These last few nights I haven’t slept very much because Neo’s had a cold.”

What he was trying to say, and eventually did, was this: “Having kids teaches you how much responsibility you have for the future. You don’t understand viscerally, until you’ve got kids, how what you do and who you bring up affects future society. Will you bring up someone who is considerate, curious, respectful and responsible, or not? And suddenly that burden, which is one that I’m happy to have taken on, is very different from the more ephemeral nature of the work that we do. While I may have some resonance now and in the future in the ways that I collaborate that affect policy and politics, ultimately, the greatest impact that any parent has on the future is the kids they’re bringing up.”

Pet Mania: At the Animal Den