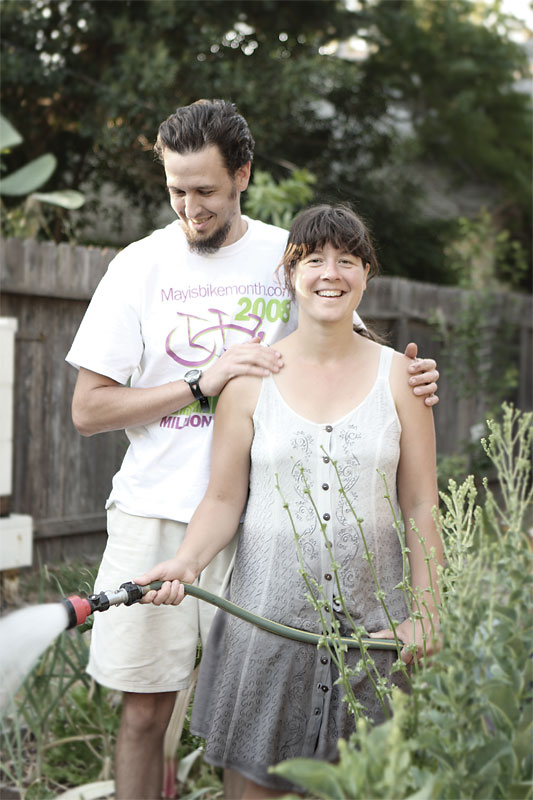 Changing light bulbs is all fine and environmentally dandy, but these area residents have taken extra steps to lighten their carbon footprints on Mother Earth.

When we went looking for local people with environmentally friendly lifestyles, we were not content with folks who limit their green efforts to recycling and using compact fluorescents. Those are admirable gestures, worthy of plaudits, but we were looking for a richer shade of green. The following people have embarked on eco-enlightened paths, open-minded and determined in their journey toward greener pastures.

You know a young couple is serious about environmentalism when they decide not to have children because overpopulation on this planet is a huge issue. Ryan Hammond, 33, says that he and his wife, Maria Kochis, 36, will adopt if they want to become parents. There are a lot of needy children out there.

Hammond, a heating and cooling system designer, bicycles to his job five miles away. Kochis, a Sacramento State librarian, walks the three miles to and from work. For three years, they have raised bees in their backyard, where they also grow edible greens and fruit. We’ll make pickles and sauerkraut with homegrown cucumbers and cabbages, Hammond says, adding that they also maintain four bins&emdash;two each for worms and composting&emdash;and have only native plants in their front yard, to limit watering.

When they buy food, they prefer it be locally grown, even when the cost is more, he says. It’s an investment into our very own community, is how we look at it. Good to support the local economy as much as possible, to give it strength.

Green origins: A dozen years ago, Hammond started down the green path because, I think just looking around and realizing the way we live in this nation is by no means long-living. There’s the saying, â€˜Keep in mind the seventh generation,’ so I am keeping that in mind.

Green tip: Take little steps. Find innovative ways to walk lighter, but have fun with it. Keep in mind other people’s children, as well as your own.

Optimistic about a green future? It seems like things are changing for the positive, largely driven by economics. In sum, I am.

When Nathan Marlow is out and about and sees paper on the ground, he’s likely to stash it in his trunk for later deposit in his recycling bin. I’m not ashamed to say this, says the 50-year-old network marketer. It’s for Mother Earth, and I’ll do anything for her.

Marlow, a Screen Actors Guild member whose TV credits include the Boomtown episode of Nash Bridges, embraces his role in the greater green movement. I recycle everything, he says in his deep actor’s voice, adding that he recently insulated his home and installed a tankless water heater. For the past dozen years, he has made his diet more Earth-friendly, too: I’m a lacto-ovo vegetarian. No exceptions.

Green origins: I’ve always been a lover of nature and animals and that kind of thing. I think we owe it to ourselves and to future generations to leave Mother Earth better than when we found her.

Green tip: Don’t be wasteful. Love your home. The Earth is your home.

Optimistic about a green future? Not really. In the short term, no. In the long term, yes&emdash;not because we’re smart, but because in the 11th hour, we’re going to have to do it or we’ll die.

Christian Blackburn bicycles everywhere, anytime, for whatever reason. He has been known to shop at the Arden-area Whole Foods Market on a dark winter’s evening, thinking nothing of the 10-mile ride home through a gantlet of busy intersections and speeding SUVs.

At home, the car-free commuter makes his kitchen a no-parking zone for junk food. He even admits to occasional foraging.

I try to eat as little processed and packaged food as possible, says the self-employed computer repairman, 28. Take a Twinkie, for example. Ingredients composing that Frankenfood are gathered from all over, transported, refined, packaged and preserved with toxins to keep it from being edible to ants and bacteria that might also call it a snack. Now compare that to picking an orange off a local tree. I didn’t burn any fossil fuels, there were no toxic gasses emitted into the air, no lights must be shined on it to capture sales, and there isn’t a plastic wrapper that must be discarded afterwards that won’t decompose for 2,000 years.

Green origins: As a boy, I’d get sick often, Blackburn says. Now he’s a superfit and health-conscious vegan raw-foodist, keenly aware of how his diet interacts favorably with the environment. Around the globe, the peak times of day for gas and electricity usage are mealtimes. More often than not, I only require a little mixing or cutting with my hands to enjoy an exquisite meal.

Green tip: The single best thing you can do is educate yourself.

Optimistic about a green future? Absolutely, if I look at people’s awareness of the environment [now compared with the 1980s.]

Making environmentally conscious decisions at home is admirable, but Rebecca A. Markussen, 32, wanted to do more. So last year, she founded Visionary Professional Services (visproservices.com), which promotes livable communities through talks, individual counseling, writing and other services.

This venture embodies my values and encourages others to live sustainably by transitioning away from single-car driving as well as eating and buying locally, says Markussen. She considers the business the truest testament to my greenness.

This is not to say she commits eco-no-nos at home. I line-dry my clothes in the summer and use environmentally friendly cleaners, she says. I combine any dryer lint with melted candle stubs to make fire starters for the barbecue. I am constantly weeding out things that are not being used to donate to secondhand stores.

Green origins: After discovering that the outdoors was one of the few places where I could connect with my inner self, I was motivated to live in ways that didn’t threaten its vitality.

Green tip: Don’t be hard on yourself if you are unable to integrate all of the green behaviors into your lifestyle at once. Remember, you are already making a huge impact by setting an example for your neighbors.

Optimistic about a green future? Yes. I have hope that the collective impact of individuals living green lifestyles can shift our culture’s priorities from consumerism at any cost to sustainability.

We are really â€˜accidental greenies,’ says Faye Dixon, 53, a psychologist and researcher at the UC Davis M.I.N.D. Institute. She and husband Dan Ragland, 45, and daughter Sasha, 14, have embraced a more environmentally conscious lifestyle since moving to Davis from the East Coast in 2006.

The family owns one car, a hybrid, and bicycles about town when practical. We do prefer organic foods but are not fanatics, Dixon says. We have a push mower and a really nice vegetable garden. We just ordered chickens from Higby’s in Dixon so we’ll have our own eggs soon.

At this point, Sasha may be a lighter shade of green than her parents. She is pretty horrified about anything organic, or at least pretends to be, her mother says.

Green origins: We moved from Philadelphia two years ago and we just found it was pretty easy to go green. We did a lot of the same things in the big city but we’ve found it easier and simpler to do it here. It’s our version of the old â€˜Green Acres’ TV show, except no pigs&emdash;well, not yet, anyway.

Green tip: Buy and eat as much local-grown produce (and other foodstuffs) as possible. It certainly is fresher and tastes better, and hopefully costs less to move it from â€˜farm to fork.’

I like to have a compact life, says 49-year-old Jennifer Griffin, who bicycles to her job as an instructional assistant in Sacramento City College’s art department. I like to eat local and in season. I like to think about the consequences each act may have on the Earth.

A Sac City colleague, Julie Hawthorne, calls Griffin the greenest Sacramentan I know. One way Griffin earns such praise is she isn’t wasteful.

If you want to be green, simplify, she says. Only use what you need, instead of what you want. Well, a little of what you want is OK. It can be transformational to give up what you don’t need, so other species can thrive. Slow down, enjoy what
you have.

Green origins: As I grew up and learned how things worked, I was shocked at human impact on the Earth. I chose as soon as I was on my own not to eat meat, to eat simple foods, to barter, trade and find things I need, not to drive a car, to live with less and make do.

Green tip: I have a â€˜half’ theory: Use half of what you usually use, like soap, salt, water, gas, dishes, clothes, etc. See if life is still OK with less.

Optimistic about a green future? I have to admit that I am not optimistic about human impact on the environment since the population is growing and countries like India and China want a First World lifestyle. Technology may provide answers for some of our problems, even though the impact of new technology usually creates new problems. Sustainability is the only way to survive.

Many of the people interviewed for this story are vegetarians or vegans. What does a meat-free diet have to do with the environment, you ask? Consider these facts:

â€¢ To raise animals used as food, farmers and ranchers use about half the nation’s fresh-water supply.
â€¢ Farmed animals in the U.S. produce about 130 times the excrement of all Americans combined, adding greatly to water pollution and soil contamination.
â€¢ About 1.4 billion people could be adequately fed with the grains and soybeans given solely to U.S. cattle.
â€¢ To produce one pound of food, a farmed fish such as salmon or seabass must be fed five pounds of wild-caught fish.