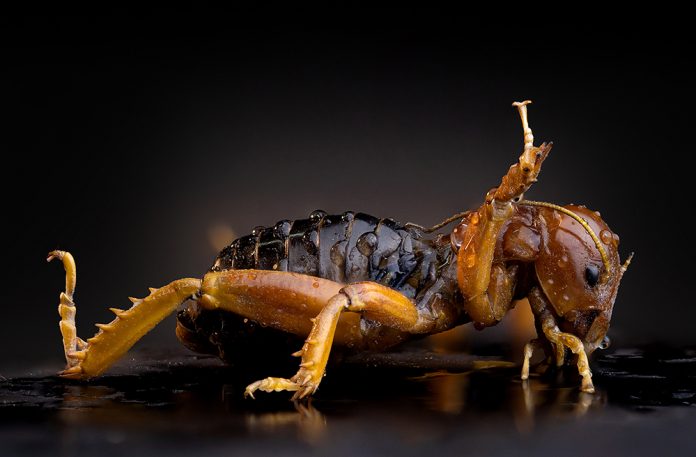 The Jerusalem cricket isn’t the prettiest insect around, but don’t hold that against it. Dr. Lynn Kimsey, professor of entomology and director of the Bohart Museum of Entomology at UC Davis, shares some insights on these harmless (even beneficial) creatures.

We can’t all be supermodels. It might be its giant bald head and beady eyes, or it could be its long, shiny body, which can grow up to a few inches in length, that freaks people out. The Jerusalem cricket looks nothing like other insects we’re familiar with, but it is a relative of standard grasshoppers and crickets, which may have gotten the better end of the gene pool when it comes to physical beauty.

Why are we so afraid of them? “There’s a great deal of survival value in avoiding things you fear. As humans, we fear things we don’t understand. So it may seem silly, but the wiring’s pretty deep and pretty profound. You almost have to learn out of that,” says Kimsey.

Owls love them. Every living creature plays an important role in the ecosystem. One student’s research on owl pellets at UC Davis revealed owls rely heavily on Jerusalem crickets as an important food source during the winter months, says Kimsey. Because they’re packed with protein, other animals—including foxes, coyotes, birds and mountain lions—consume them, too.

My, what big jaws you have! Jerusalem crickets are omnivores, feasting on other insects and lots of plant material. Kimsey says they need those powerful jaws (and a big head to support them) to chew up plant matter and roots. “They have no venom. They are absolutely harmless, unless you are foolish enough to put your finger between their jaws,” she says. They can deliver a painful bite if they’re provoked. But look at it this way: Your neighbors can bite, too. But they probably won’t. The same goes for the Jerusalem cricket.

They have their own love language. Jerusalem crickets rapidly drum their abdomens against the ground during mating, normally at night. One drums first, the potential mate responds and they continue drumming until they locate each other. According to the KQED program “Deep Look,” each species of Jerusalem cricket has its own drumming pattern, and they respond only to their own species. Their drumming is so loud, it can be heard up to 50 feet away, according to “Deep Look.” That makes for a great opportunity for kids to use their senses to engage with the natural world and explore animal behavior.

Uh-oh! The GPS isn’t working! These underground dwellers normally come out at night. When they’re wandering, they might take a wrong turn and end up somewhere like your garage. They don’t want to be there, and Kimsey says they certainly can’t live there. If you find one unearthed, do what Kimsey does: “I just scoop it up in a cup and put it outside under a shrub.” She assures you it won’t lunge at your shoe.

If you live in the city, you aren’t likely to see one, as we’ve uprooted them from our urbanized centers by destroying their habitat. But they still remain in regions where their habitat is less disturbed, says Kimsey, such as Winters and communities closer to the foothills like Folsom.