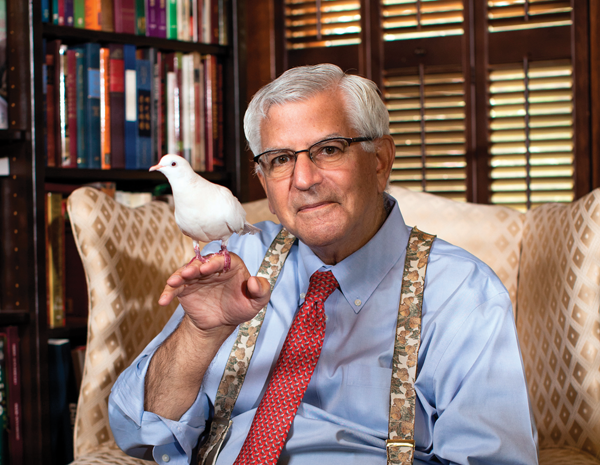 Darrell Corti knows more about food and wine than anyone else in town—maybe more than anyone in the world. He’s got some opinions, too.

If you’re an adventurous shopper who delights in making new food and wine discoveries from local to international, then you know Corti Brothers market in East Sacramento. It’s the sole survivor of a onetime upmarket mini-chain with roots in 1947, when brothers Frank and Gino Corti partnered to open an Italian grocery store in downtown Sacramento.

If you know the current store, an aged building on Folsom Boulevard that opened in 1970, it’s likely you’re familiar with its proprietor, Darrell Corti (Frank Corti’s son), the man known for his encyclopedic mind. He’s the soft-spoken gentleman with the impeccable manners. You can spot him by his trademark blue grocer’s jacket and white hair. He’s usually found in the wine department, often involved in a teaching moment with a customer.

Corti is an international figure in the wine and food trades, known personally or by reputation by those who raise, grow, ferment, age, distribute and purvey the finest foods and wines on Earth. They go to him for guidance.

But Corti’s innate modesty belies his celebrity and obscures his credentials as an indisputable authority on all things food and drink. He says in earnest, “It’s all bullshit. I sell groceries, so I’m a grocer. I haven’t done very much.”

Never mind that the Italian government bestowed a knighthood (cavaliere) on him for his work in bringing Italian wines to the attention of American consumers. Or his presence on the advisory board of the Smithsonian Institution’s Food History program. Or his induction into the Culinary Institute of America’s Vintners Hall of Fame. Or that he engineered the revival of zinfandel and other grape varietals in the Sierra foothills. Or that he introduced Sacramento to white truffles, Japanese tea, Parmigiano-Reggiano, extra-virgin olive oil, balsamic vinegar, Spanish sherry and single-malt scotch.

The point is: Corti and his store are unique. Go see for yourself. Or travel vicariously with him at Corti TV’s archive of nearly 1,000 videos shot around the world by Corti Brothers store director Rick Mindermann, who accompanies Corti on his travels (https://sites.google.com/site/tvcorti/).

I visited with Corti in his Curtis Park home for a chat shortly after his 77th birthday in April. Preparations were underway for another global expedition in search of unusual products. This one was a three-week hunting-and-gathering trip to Japan, Hong Kong and China.

Corti’s house was built in 1924 and, once you’re past the medieval-looking door, glows with a reassuring aura of comfort. Paloma, his 6-year-old pet white dove, flew in from the kitchen and joined us, cooing and billing and never leaving Corti’s side.

You’re known for traveling abroad and finding unusual foods and wines. What was the first thing you ever imported?
When I was in Spain in 1962 and 1963, I tasted delicious pickled white figs. We imported 25 cases of them. They came to the store and most of the tins exploded. My father was furious.

What’s your best advice for a first-time customer?
Tell us what you’re looking for. Look at people who travel to exotic countries. They go for the possible adventure. Once they get there, they start to experiment with the adventure. We’re the same way.

You always take the time to talk with your customers about food and wine.
It’s very interesting to show people something they’ve never experienced before. And it’s even more of a pleasure for me to pop balloons, as in explaining why something is either true or is not. (For instance) people want to see extra-virgin olive oil in clear glass bottles, for the color, which in fact is the worst thing because light immediately destroys the quality of the oil. You put it into a dark glass bottle and people say, “I can’t see the color.” Well, what’s more important: the condition of the product or your impression of the product?

When it comes to cooking, is simple always better?
Yes, but sometimes the simplest cooking is the most difficult. Most restaurants in Sacramento don’t know when enough is enough. They want to make complicated dishes, not simple ones. Four ingredients is one too many.

What are some of your favorite go-to’s, other than popcorn?
I prefer to eat things that are steamed or boiled. A very good dish is boiled chicken. It has a natural taste. You don’t see it in Sacramento, but Rick Mahan at Waterboy sometimes makes a bollito misto (mixed boiled meats). People don’t want to eat that way anymore; they want to eat something that’s exotic-sounding. Everything has to be new. On the other hand, sometimes (a dish) is not new to anyone except them. For a long time, you couldn’t get Americans to taste anything new. In the 1940s, spaghetti and meatballs was considered exotic.

What items are lauded by the public and chefs that are overrated?
You really want to get me into trouble, don’t you? At one time, it was fashionable to eat a macrobiotic diet. The basis for most of those was brown rice. My friends in Japan say, “If we have to eat brown rice again, we would prefer not to eat rice.”

When you infuse oil with truffles, all you’re doing is contaminating the oil. People say, “Oh, it’s got truffle oil in it; it’s got to be splendid.” The truffle “oil” is not from truffles, but is a chemical synthesized from sulfur.

Are we distracted from what real food should be because of fast-food chains?
I happen to like McDonald’s and In-N-Out Burger because they satisfy a need. Most countries think food should taste good, but we expect it to be cheap, costwise. We look at food as a right that we deserve. We don’t deserve anything. Most Americans think they should have the best of food, the best preparation, and they have no idea what that is, in either case.

What’s your view of food trends, both in the private sector and in restaurants? Like the keto diet, sous vide cooking and avocado toast?
How many (trends) are really worth dealing with? Some are merely cooking styles, such as sous vide, and aren’t the basis of anything. They come in and go out of fashion. No one talks about cuisine minceur anymore, which is a low-calorie cuisine you found in spas. Even nouvelle cuisine has disappeared. Some of the most traditional dishes are not the showiest. For example, ribollita is a Tuscan minestrone into which you put dry bread and then recook it. It looks like mush and diners don’t want to see that, but the taste is wonderful.

Your store was doing farm-to-table long before Sacramento branded itself America’s Farm-to-Fork Capital in 2012.
Farm-to-Fork was a very good idea because we live in an agricultural area. I know when it first started it was considered a bit of a joke, but when anything that’s novel first starts, people don’t consider it seriously. Now I think it’s very serious. One thing that’s curious is that the Sunday farmers markets have become the local version of church. People don’t go to church as much anymore, but they do go to farmers markets. And the gym. (Years ago) we had a customer who would come to us and buy eggs to sell at the farmers market. No one could prove those eggs didn’t come from her chickens.

You’ve described yourself as shy, yet you’re insatiably curious and you can be very direct.
I’m modest because I don’t have a lot of salient characteristics. I became interested in what I do because I don’t like getting hurt, so in order to avoid that I didn’t do sports growing up. On the other hand, I’ve been doing this for a very long time. It takes a lot of midnight oil, a lot of time and effort. I’ve read all the books you see around here. (One whole room is filled with them.) I have another house that has more books than this, and I’ve read all those, too. I’m more interested in things than I am in doing things.

You’ve produced your signature newsletter since 1965, recommending items and educating your customers about them.
Part of how I select things is how interesting and novel they are, which will end up on our store’s shelves. There are people in the hinterlands making interesting, small things. Sometimes they work, sometimes they don’t.

Many of your discoveries have been made at international food and wine trade shows.
Sometimes you have to travel to find things; sometimes they land on your lap. Under the current situation we have in the world, it’s much less interesting to go find products because everyone thinks a priori (theoretically deduced) that they’re going to be unhealthy because they’re not made here. That’s not true. (For example) we probably have to recall more products in this country because of salmonella and E. coli than any other country in the world.

The new currency among millennials seems to be learning culinary skills at cooking classes.
They want to say to their peers, “I know more about cooking than you do.” They say they have more experience, they’ve gone to more places, but they never learned anything.

More people than ever are dining out, yet it seems etiquette is eroding.
The table is one of the most civilizing places in the world because there is a certain etiquette to be applied, yet fewer people know how to act at table. They think they can do what they want. Bullshit—they can’t. Most Americans have absolutely no idea how to use table utensils. Watch how some people cut a piece of meat, for instance.

Do you feel you’ve accomplished everything you set out to do?
Corti Brothers is a small business that hasn’t reached the pinnacle of success. The biggest problem is the world is very big and something new is always available. There is always something beyond.

Where does the future of Corti Brothers lie?
Hopefully we’ll be here at least another 10 years. You have to spend a lot of time making sure what you can do is better than what someone else can do. In that respect, I’ve been very lucky because I had a very indulgent father who rarely said no. On the other hand, he also said, “If you buy it, sell it.” So there you are.