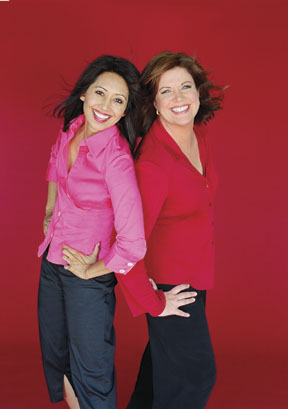 Marianne McClary and Tina Macuha have been on-air personalities for “Good Day Sacramento&emdash; since the show debuted on Aug. 14, 1995. Neither has any intention of leaving the program. In fact, they have a fairly serious joke going between them that if the show continues ad infinitum, they’ll move to the retirement community near both of their homes in Carmichael and rename the show “Good Day Eskaton.&emdash;

One recent midday morning—after McClary had been on the air for four hours and Macuha for all five hours of the show’s running time—the two reflected on the program’s pedigree over breakfast at Fox & Goose Public House in downtown Sacramento.

“At first, people thought our show was too lighthearted, too crazy a mix,&emdash; says McClary, who hosts the show along with Nick Toma. “Because when it comes right down to it, ‘Good Day Sacramento’ is like an all-you-can-eat buffet of morning news.&emdash;

Macuha, the show’s traffic anchor and human interest reporter, has lived and worked in Sacramento all of her life. She spent 12 years in radio, her first love, and started building her fan base in the early 1990s as a traffic reporter on FM 102’s morning show.

McClary, 43, started her TV career while still in college, working as an intern at KCPQ-TV in Tacoma, Wash.—a station that became one of the FOX network’s early affiliates (as did local Channel 40). She impressed her bosses enough to land a paying job at the station, where she did everything from voice-over work to news anchoring. This led to her being hired for her first full-time anchoring gig by an eastern Washington station that was a converted funeral home. “They made the former embalmer our chief engineer,&emdash; McClary says before bursting into a raucous laugh. (She never quite makes it clear whether she’s kidding, which somehow makes the comment even funnier.) She anchored next in Las Vegas and then for four years at the NBC affiliate in Phoenix, which is when Channel 31 came calling.

“When we started on this show in 1995, we were convinced that only five people were watching,&emdash; says Macuha, who’s 44. Today, “Good Day Sacramento&emdash; has a daily audience that can climb into the hundreds of thousands, although not necessarily all at the same time. Regardless of when the audience materializes, it’s one that takes a very proprietary attitude toward the show’s on-air personalities. “When we run into people at the grocery store, there’s sometimes an odd moment,&emdash; McClary says. “They feel that since they know us, we probably know them. And I understand where that’s coming from. But when you really think about it, if a quarter of a million people know you, that doesn’t mean you know a quarter of a million people.&emdash;

“I had a stalker a year ago,&emdash; says Macuha, sarcastically adding, “That was really pleasant.&emdash;

“I’ve had marriage proposals,&emdash; McClary says. “I think it has something to do with my dropping business cards in free-lunch bins all over town.&emdash; This cracks up Macuha.

While the on-air camaraderie between McClary and Macuha clearly extends to their personal lives, both point out that their work and home schedules don’t allow for a great deal of post-show socializing. Weeknights, McClary goes to bed by 8 p.m. and Macuha by 9:30 or 10 p.m. (She says she’d retire earlier but likes to spend “mommy time&emdash; with her 12-year-old daughter.) Macuha generally gets up at 3 a.m. and arrives at the UPN building off Highway 160 by 4:30. McClary says she rises at 4 a.m. and gets to the station by 5 to be ready to go on the air at 6. “People say I’m relaxed on the air—and I am, but only when I feel prepared,&emdash; she says. That calmness, she points out, was acquired. “On the first day of the first show we ever did,&emdash; she says, “I didn’t move from the exact same position on my stool on the set for three straight hours.&emdash; That was the show’s original running time. Today, it airs Monday through Friday from 5 to 10 a.m. and has a weekend version as well, which features Gary Gelfand, Stefanie Cruz, Ron Jones and Chris Burrous (all of whom make appearances on the weekday version).

For the rest of this story pick up a copy of Sacramento magazine’s August issue.