Local chef and cookbook author Hank Shaw has made a name for himself in the food world with an award-winning blog (Hunter Angler Gardener Cook) and four cookbooks. To date, his books (with names like “Hunt, Gather, Cook” and “Buck, Buck, Moose”) have mostly focused on the hunter part. But on May 1, he’ll release a new tome, “Hook, Line, and Supper,” based on his lifelong obsession with catching, cooking and eating fish. Here, he talks about his love of angling, where to buy the best fish in Sacramento and why you should steer clear of tilapia.

Why he prefers fishing to hunting
One, it’s more accessible. You can literally walk on a party boat and go fishing. Another nice thing is you can throw fish back. You can’t unshoot birds. When you’re hunting, you’re all in. It controls everything you’re thinking about. With fishing, you can be noisy, have a conversation, drink a beer. There’s that freedom to not be completely absorbed.

His favorite way to fish
The style I’m best at is some variation of deep-drop bottom fishing, usually with bait. You’re trying to coax the fish to bite. If you have experience, you can really, really fill a bucket. I almost always outfish the people around me. It’s all in the touch.

Where he fishes locally
I usually fish out of Emeryville or the ports. It’s all done offshore on a party boat. It’s like a bus, except everyone’s fishing. If you’re friendly and open, it’s a great way to meet new people and learn things.

On fishing in Sacramento
You could fish in the Sacramento area every month of the year. January to February, it’s steelhead, a sea-run rainbow trout that can live in fresh and saltwater. They come up in rivers here to spawn. There’s striped bass in spring and fall. Sturgeon are always here, too, but they’re best in colder months. Shad run up the American and Sacramento rivers from May to June. And salmon start showing up in August. Most people here fish for them in September and October.

Where to buy fish locally
My top recommendation is Sunh Fish. They don’t carry everything, but their selection is curated, so whatever they have is good. Sacramento Natural Foods Co-op is similar; I’ve never had bad fish from the co-op. Whole Foods is pretty good. And the Asian markets are very, very good if you know what a quality fish looks like. They’ll have pristine fish next to ones that probably should be thrown out. Finally, if you’re shopping at a regular supermarket, ignore the fish section and go to the freezer section. Most things in the fish box have been frozen already. It’s just been thawed.

His favorite species to fish for
I would probably say tuna. They’re challenging. They’re big, they’re strong, you’re offshore, the waves are high. And if you get into them, it can be mayhem in a minute.

Most overrated fish for eating
Tilapia. It’s basically inedible. I call it the Soylent Green of fish. I have eaten good tilapia, but it was tilapia I caught myself in the Gulf of Mexico. The farming practices for tilapia and most shrimp are so foul, I won’t eat them.

You can order signed copies of “Hook, Line, and Supper” through Hank Shaw’s website, honest-food.net, for $30 plus shipping. 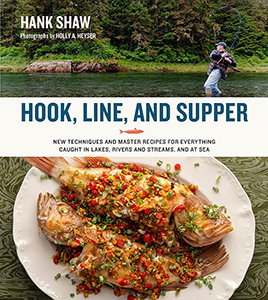 Excerpted from “Hook, Line, and Supper: New Techniques and Master Recipes for Everything Caught in Lakes, Rivers and Streams, and at Sea” by Hank Shaw. Copyright 2021. Excerpted with permission by H&H Books.

Sailing on a party boat, sometimes called a head boat, is like riding on a bus where all the passengers are fishing. You pay your fare, and you’re in. You can often rent rods and tackle, too, and the deckhands will fillet your fish for you afterward. The wonderful thing about these boats—and they’re all over the country, wherever there are large bodies of water to fish and cities nearby—is that you meet every sort of angler. I’ve fished with Chinese immigrants and old-timers both black and white, with an expert retiree who fishes every week and newcomers who didn’t know how to bait a line. I’ve fished with Southerners and Northerners, foreigners and locals. If you’re an affable angler with a gift for gab and a willingness to trade stories, there’s a world of learning available on these humble cruises, an intercultural goldmine of tips and lore about how to catch the fish you’re after and how to cook them when you get home.

From my Chinese fellow anglers, I learned about steamed fish. Sounds boring—until they let you in on the part where you drizzle roaring-hot chili oil over the fish at the table. A venerable Korean War vet was the first to school me in the importance of temperature when frying. (If you’ve read my first book, “Hunt, Gather, Cook,” this is the same guy who taught me about oyster toads.) I first heard about wrapping fish in banana leaves from an old Cuban who fled Castro to come work as a clerk in Newark, N.J. This was my real schooling. Far more than the algebra and the Latin I was forced to take, this is the education I remember.

I later took a job as a deckhand aboard the Laura Lee, out of Captree, near Bay Shore, Long Island. The Laura Lee still fishes, too. I worked just a single summer on that boat, but what I learned there has stayed with me to this day—patience (especially on those half-day trips where inexperienced fathers would tell their sons wildly incorrect information about fishing) and pain tolerance. (I lost track of how many times I was accidently hooked by a customer.) But I was meeting people from everywhere and of all kinds, and learning all the way.