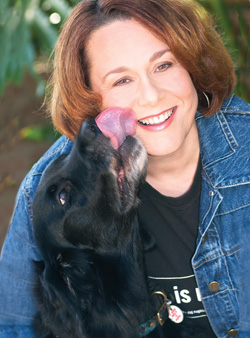 Gina Spadafori was training her neighbors’ dogs by the time she was 10 years old. Her 1996 book Dogs for Dummies has sold 120,000 copies. She writes a nationally syndicated pet column. And she vacations at Westminster and Crufts, the two largest dog shows in the world. The woman knows from dogs. So you’d expect that all things canine are pretty much under control chez Spadafori, home to four dogs.

That is, until she tells the story of Andy, her sheltie, who ate an entire box of Q-Tips that had to be surgically removed. Or Heather, her flat-coated retriever, who was so uncontrollable that, until the dog was 3 years old, Spadafori feared she would pull her arm out of its socket during every walk. Or Ben, another flat coat, who once ate five-pound bags of rice, beans and flour. “He had thrown up and pooped everywhere. And what he hadn’t eaten, he scattered all over the house,” says Spadafori. “I was finding the stuff for years.”

No, being a pet expert doesn’t grant her immunity to the foibles and frustrations of pet behavior, Spadafori tells a visitor to her Arden-area home. In fact, says Spadafori, animal misdeeds come with the package.

“They’re flat-out goofy,” she says of her animals while, behind her, old Ben stands stoically as the younger Heather attempts to mount him.

Spadafori’s award-winning syndicated pet column, “The Pet Connection,” which appears weekly in The Sacramento Bee and some 60 other newspapers, celebrates its 20th anniversary this year. When Spadafori is asked about her passion for animals, she says, “It’s not so much a passion as a natural connection. I’ve always felt it.” When she was diagnosed with asthma at age 5, her parents felt obliged to give away her beloved boxer, Lucky. “That didn’t stop me from riding my bike for a mile to give apples and carrots to horses,” she says. “Or luring cats and dogs home with treats.” Spadafori fed, played with and petted a neighbor’s cat so much he finally gave the pet to her. With that, her parents relented and got her another dog.

Pets became a mainstay in her life, and she read voraciously on subjects even vaguely connected to animals. She describes herself as having been a bookish little girl who loved to write. “It always came easily to me,” she says. In the late ’70s, as a journalism major at California State University, Sacramento, and editor of the school paper, The State Hornet, she set her sights on becoming the managing editor of The New York Times. The Bee hired the Sacramento native while she was still in college to cover high school sports.

Eventually, she was offered the pet column on a rotating basis with two other writers. After a year, it was hers alone.

For a long while, she clung to her New York career goal and referred to her column as “what I’m doing on the way to wherever I’m going. But life takes funny detours,” she notes. “You have to find out what works for you.” And what worked for Spadafori, now 46, was writing about animals. “I’ve never wanted for an idea in 20 years. I love animals. And I had a real calling to get the right information out. I’ve always felt I was doing such a good service.” Then as now, she relied on experts, behaviorists and veterinarians to fill in the gaps in her extensive pet-care knowledge. “I’m not a veterinarian writing a column,” she says. “I’m a journalist covering a beat, and my beat is pets.”

In 1996, she left The Bee to write Dogs for Dummies, and for the first time, her writing talent eluded her. “I was used to writing in 600- to 800-word chunks. But this was huge. It took me a year to write the book: six months curled in a fetal position and six of actual writing.” The book, now in its second edition, went on to win numerous awards, and Spadafori went on to write Cats for Dummies (along with Dr. Paul Pion) and Birds for Dummies (with Dr. Brian Speer). Her three books have sold more than 325,000 copies and been translated into many languages, including French, Serbian, Danish, Japanese and Russian. Spadafori also has done stints as the chief pet writer at Pets.com and as head of the first online pet forum at AOL.com.

Her column, which has been honored as the country’s best newspaper pet column by the Dog Writers Association of America, is a series of stylish and heartfelt ruminations on the relationships between pets and people, and how to improve them. “More than anything,” says Spadafori, “I’m an advocate for the beauty of the relationships we can have with pets—for the joy they can bring into our lives.” That’s not to say that Spadafori doesn’t address the more pedestrian litter box issues, sit-and-stay challenges and messy gerbils.

She does, but all with an eye toward helping people and animals enjoy each other more.

Spadafori admits that at one time her pet-care library ran to almost 9,000 volumes. Speer, her Birds for Dummies collaborator, says, “She steeps herself in the subject material. She’s not satisfied with bits and pieces.” Loyal reader and friend Maggie Roth agrees. “She’s scrupulous in her research,” says Roth. “She studies every aspect of an animal until she’s an expert.” Spadafori’s longtime editor at Universal Press Syndicate, Greg Melvin, says, “She’s one of the most talented writers that I get to edit. A pet column can be the most cut-and-dried writing. But Gina has style and humor and great warmth. And even though she’s very passionate about animals, she’s not unrealistic in that old-woman-who-lives-in-a-shoe-with-50-cats kind of way.”

Ask people about “The Pet Connection,” and they’ll say it’s funny. How could you not smile when a pet column opens: “Andy marked his 14th birthday in what has become traditional in recent years: with a basket of cherry tomatoes and a prostate exam.” Or take the column she devoted to the songs she’s written for each of her pets. Then there is the “Pets on the Web” section of her column, where she tips off readers to interesting websites for pet owners, such as the one for doggy Christmas carols (ddc.com/waggers/carols_tennis_balls.html) or dancing hamsters (hampsterdance2.com).

What clearly drives Spadafori’s column and sparks its authenticity is her love for pets. She figures that in her lifetime she has rescued and found homes for 200 to 300 animals—training, spaying or neutering them all. Her current menagerie includes flat-coated retrievers Heather and Benjamin; Drew, a sheltie; Chase, a Cavalier King Charles spaniel; Eddie, a black-headed caique (who whistles the “Miss America” theme and the Florida State University Seminole war chant); Turbo, a flop-eared bunny; and rats Ava and Zoe. (Andy, the sheltie, died in 2002, a loss she movingly wrote about in her column.) She also hankers for a horse—maybe even some chickens. “And yes,” she says, “I know I’m crazy.”

What have animals brought to her life? “Aside from a lot of fur?” she asks. “I think they bring us into ourselves more. I don’t enjoy being on a beach as much as I enjoy being on a beach with my dogs. The sounds they hear, the smells they smell, even though I can’t share those senses, their body language is such that I can draft on their joy. They bring me closer to something I can’t experience on my own.”

While Spadafori writes happily about doggie wheelchairs, bird perches and turtle care, her real passion is in communicating the lessons we can teach to children through animals. Spadafori cites her favorite quotation (author unknown): Teaching a child not to step on a caterpillar is as important to the child as it is to the caterpillar. “I think when parents take a throwaway attitude towards family pets,” she says, “they are teaching children that living things have no value.”

She has written many times about another passion: the importance of taking animal cruelty seriously, especially in children. “The prisons are full of violent criminals who became hardened to cruelty by seeing it perpetrated on animals, and then by practicing on animals themselves before moving on to people,” she writes. “Further, some of history’s most infamous mass murderers—Ted Bundy, Albert DeSalvo and Jeffrey Dahmer among them—honed their ‘skills’ on animals first.” She believes in immediate intervention when kids abuse pets.

Her message really comes down to love: loving an animal enough to give it the best care, and in doing so getting so much love in return. “The better I care for my animals, the more time I spend with them, the better I know them and the more I learn from them,” explains Spadafori.

“In my work, I can help someone take an animal with difficult behavior or an illness and change that. I can help human caretakers realize the potential their pets have for enhancing the quality of their lives.” What gives her the ultimate satisfaction from her work? “When I get a letter or a phone call saying that I’ve saved an animal’s life with my advice—you can go a long way on that.”