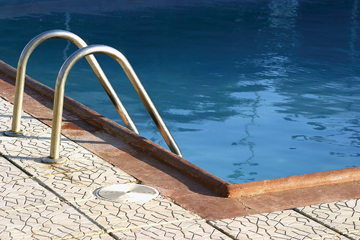 The summer moon illuminates a former synchronized swimmer as she takes a dip.

On a hot August night, I head for the pool. It’s nearly the end of my summer swimming regimen; before the month is over, I’ll have to start teaching again, giving my nights to college students. I love my job, but it will mean the end of evening swims.

At 9:30, a fat full moon, pregnant with possibility, lumbers into the sky. I drive toward it on H Street, scanning the sky as the moon plays hide-and-seek with the trees. I am always eager to try to see the pimpled surface where men once walked. Years after I once watched stars for hours with amateur astronomers in Roseville fields that now sprout houses, I am still fascinated by the heavens.

For years, in my youth, I took to pools eagerly and often. Daily, in fact, each summer. When I was 3, there were swimming lessons to which I strongly objected. My parents moved next to Folsom Lake the summer I turned 8 and my sister was 6; they taught us to water-ski the next year. My sister and I finished the highest level of Red Cross swimming lessons at about the same time. By the age of 11, I considered the pool a refuge&emdash;from heat, from my landlocked clumsiness, from anything my mother wanted me to do. We joined the local synchronized swim team thanks to Brenda Dillon, my sister’s best friend, to practice with other girls doing magical underwater stunts and routines to music.

The team practiced at Roseville High School pool, a good 10 miles from our house, so Mrs. Dillon and my mother swapped carpooling duties. They also acted as unofficial coaches at practices, and judges and referees during meets. I was not an instant star. By the second summer, I almost enjoyed the team, though I was not nearly as adept or as strong in the water as my sister, Donna, two years younger and far more athletic. We practiced at night&emdash;the only time when the overbooked pool was available&emdash;which was fine with me. The sizzling pool deck no longer fried the tender soles of girl feet, and the pool sparkled invitingly, lit from below with moonlike lights.

I remember floating on my back, taking deep breaths as I prepared to arch my back, thrust a leg up in the air and perform a back walkover. Or maybe I’d do a dolphin, sculling overhead to pull myself backward and down into a perfect circle, with the goal of ending precisely where I started. When the moon was overhead, I’d sometimes float a bit too long, spellbound, until a whistle blew or a coach’s voice reminded me what I was supposed to be doing.

Donna and I grew up to spend our mornings teaching swimming lessons and our afternoons working as lifeguards. At night, I coached our synchronized swim team, which still practiced in that same pool. By the time I was 16, I stood or crouched on the side of the pool, encouraging girls to point their toes and build up their endurance by doing laps. My rule was that each swimmer had to do 10 laps to warm up. They could do them any way they liked&emdash;swimming the crawl, the breast stroke, the back crawl. I encouraged sculling laps, lying on the back, just using hand sculling to maneuver a length or two to build up arm strength. Or they could do laps underwater, holding their breath and wiggling like polliwogs, as long as they could. Or ballet leg laps&emdash;sculling on the back and raising first one leg straight up into a 90-degree angle, then the other. The pool was 25 meters long&emdash;longer than most community pools&emdash;and often the littlest girls on the team had a hard time completing a length. I’d have them swim widths of the pool instead.

Thirty years later, as I drive east on H Street to my pool now&emdash;really a friend’s condo complex pool&emdash;I think of other pools. I have done ballet legs in a grand pool at a Kauai hotel that made me feel like Esther Williams in old MGM musicals. I have sculled my way up and down the Clunie Pool at McKinley Park. When I meet people who are swimmers, I always ask where they swim. Most people seem to swim at gyms or athletic clubs, which is fine. But I look for vacant or less occupied pools where I will be less self-conscious about my slow pace or my middle-aged body. Nowadays I resemble a grape in my purple one-piece. I think of my former synchronized swimming girls, slender as exclamation points in their sleek black tank suits, who, by the ends of summers, could swim all night long, it seemed.

At the beginning of each summer, I try for 10 laps. By the end, I do 20 or more. My lungs feel stronger, and my ballet leg is almost perpendicular to the water, as it should be.

When I get to the pool, I can’t see the moon; it lurks behind walnut trees and condos. But the water, aquamarine and smooth, is inviting. The pool is deserted, though another white moon&emdash;a volleyball&emdash;floats on the surface, a leftover from an earlier game in another part of the pool. I put my towel down on a lounge chair and dip my feet in the water. I am tentative about water entry these days. As a kid, I plunged into any water of any temperature with glee. Now, I don’t even attempt this unheated pool until the daytime temperature hits 90. It has been hot today and a bit humid. The water on my feet is perfect: cool at first, but warming within a few seconds.

I ease myself in carefully, the sound of long-ago girls’ voices in my ears.  I smell chlorine and know my eyes will be red by the time I emerge, but I hate goggles. The kids on the regular swim team, who plowed through lap after lap, wore goggles; synchronized swimmers took to the water with nose clips to keep water out of upside-down noses. My first lap is a heads-up breast stroke, easy and smooth. Although I can’t see it, my body carves a V in the water. It’s the same stroke we used to use when we’d take our places in the middle of the pool to begin a routine. We’d wait for the music to begin and then perform a series of strokes and stunts timed to the tune. I just keep breast-stroking tonight. On the way back to my starting point, I look for the moon&emdash;still hiding.

I do a few laps of the crawl, remembering the annual tests of swimming instructors to make sure we could still demonstrate strokes correctly. Mine were always, as they said, straight out of the book&emdash;nothing fancy, nothing out of line, seamless. Except for the butterfly, which I could never do well. After all these years, the crawl is as familiar as walking. I take four strokes and breathe, first to one side, four strokes, then to the other. I float better now than I did when I was the 100-pound coach, a fact that makes me smile.
When I tire of the crawl, I flip to my back and do the elementary back stroke&emdash;really just a breast stroke on the back. It’s a beginner’s stroke; little kids learn to do this before the back crawl, but it’s relaxing. Now I can see a hint of moonlight above the trees.

Before I know it, I’ve done 10 laps, and I keep going. The water feels silky and warm; my right knee, where I can occasionally feel an old strained muscle, is limber tonight. It must be all the yoga in the backyard with some neighborhood ladies, who, like me, look forward to summers so we can practice under the big sycamore tree. Tonight, I feel like I could swim forever.

Slap! The volleyball that has floated near me just hit the pool wall near my head. I stop swimming, look up, startled, and a teenage boy looks at me sheepishly.

Did I hit you? he asks, concerned.

I am suddenly annoyed.

No, I say, but could you do that over there? I point to an adjacent pool area where a volleyball net is set up.

Oh, sure, he says, sounding sorry. He gestures to his friend. C’mon, you guys, over here.
His friends&emdash;another boy and two girls not more than 14 or 15&emdash;emerge and plunge into the opposite end of the pool, heading for the net. I feel their wake in my face as I start a breast stroke lap.

I try not to grimace, let my annoyance melt into the water. I’m almost done. I could just get out. But something keeps me in the water, and rolling onto my back, I see what it is. I decide to do five more laps to watch the rising sphere, marveling as always that there are tiny footy-prints and an American flag up there somewhere. And though I can hear the sounds of kids underwater&emdash;their yells, their laughs, the ball smacking the water&emdash;the fat moon crawls over the trees and shines.

I do a lap of ballet legs to celebrate.