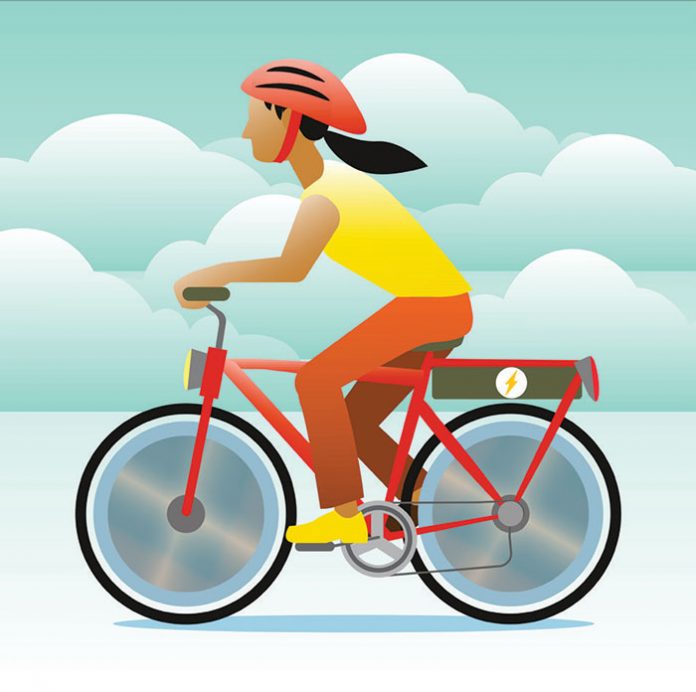 Sometimes, all it takes is a gentle nudge for people to pause what they are accustomed to doing and replace it with something more “sustainable,” i.e., something lighter on the environment.

Take bicycles. Perhaps you own one, but it’s been gathering dust in your garage despite your good intentions to ride it on short outings rather than fi re up your 1- or 2-ton vehicle with the roof on top and tailpipe belching greenhouse gases out the rear. Pedaling it a few blocks seems a bit inconvenient and just too much work.

What if that bike did some of the work for you? Gave you a little nudge, as it were? In other words, what if that bike were manufactured with an electrified motor, or converted to have one?

Bicycle stores throughout the Sacramento region sell e-bikes, and some also sell conversion kits and/or have technicians who can turn your old two- or three-wheeler (yes, “trikes” is what the adult versions are called) into an assisted-power machine.

For example, The Electric Bike Shop in the Tahoe Park neighborhood (5704 Broadway) sells new e-bikes starting from about $800 and e-scooters ranging from $500 on up.

One of the top bicycle models, the Pegasus Premio E8 Diamond, has an electrified range of about 80 miles (human pedal power is always an option) and speeds along up to 20 miles per hour. It’s yours for $3,599, plus taxes.

That price tag might knock some people off the saddle, but consider the benefits of using an electric bicycle instead of a standard automobile. The website Conserve Energy Future lists “13 Awesome Environmental Benefits of Riding an Electric Bike,” including:

• E-bikes that are charged from solar or otherwise green-generated power run on zero emissions.
• Their batteries tend to be long-lasting and recyclable.
• They’re substantially lighter than cars, and thereby much gentler on roads—not to mention less noisy.
• They are versatile in where they can be used, including on some small paths and as a way to bypass traffic jams.
• Unlike cars, e-bikes provide at least the option of exercise and the guarantee of outdoor air.

Financial factors also put e-bikes in a favorable light, even despite what might seem as a jolting purchase price. They don’t have a motor vehicle’s insurance, registration and maintenance costs. And as the website Green America explains in a recent post, “just fueling a round trip commute to a job five miles away every weekday for a year can cost $300 or more just for fuel, not including parking fees and any additional fuel used for after-work errands and weekend driving.”

Last year, the California Bicycle Coalition (aka CalBike) pointed out that e-bikes “are 10 to 30 times more efficient than electric cars at fighting climate change,” they emit “40 to 140 times fewer pounds of greenhouse gases than a 30-mile-per-gallon gas car, assuming it is charged with California’s electric energy mix,” and “are incredibly cost-effective. Most bikes cost less than a penny per mile to charge.”

Whether you feel safe riding a bike on today’s busy streets, with its large vehicles and too-often-distracted drivers (i.e., they’re texting!), is another story for a different column.