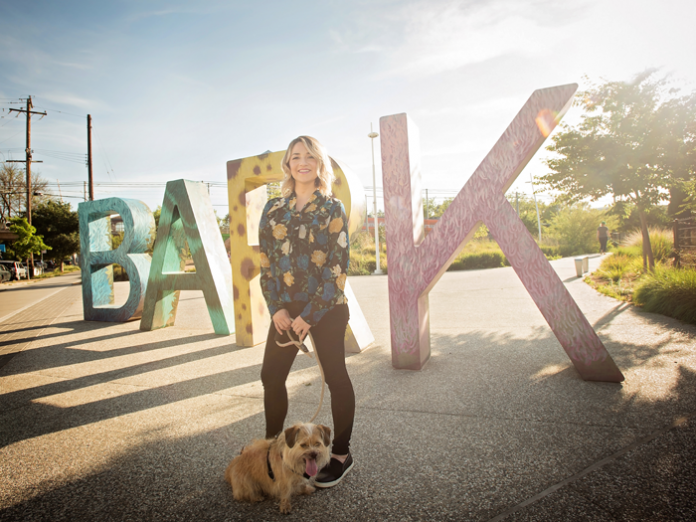 What makes a city great? Landscape architect Kimberly Garza believes public spaces—our parks, waterfronts, plazas, gardens and other gathering spots—are the foundation of a vibrant city. The creative force behind Sacramento’s first urban dog park at 19th and Q streets, Garza founded her firm, Atlas Lab, to raise the profile of landscape architecture in Sacramento and improve the community through the thoughtful design of engaging spaces.

We talked with Garza recently about how her interest in cities was sparked, the challenges and opportunities surrounding Sacramento’s public spaces, and how landscape architects can lead the city toward a better future.

What informed your interest in design, and in public spaces in particular?
Growing up in Sacramento, I was fascinated with all the vacant space in our city and by observations like why sidewalks would abruptly end in a neighborhood. I would constantly think about how I could fix things. I was drawn to landscape architecture because it’s really about designing the built environment and creating a place where people want to live.

What are we missing in Sacramento?
We are truly missing an investment in public spaces. I have sat in countless meetings where people say they want a space to look like something in San Francisco or Chicago. They will show me photos of projects they like, but then they say there’s no money for it. I think people want to see change here, but there is an incredible lack of support for designers here.

What are some public spaces that inspire you?
Klyde Warren Park in Dallas is a phenomenal park with such a diversity of uses: performance spaces, play areas, a dog park, a reading zone. It’s a landscape-driven project that is truly a destination. Also, Pearl Brewery in San Antonio, which is a mixed-use development where developers reoccupied a former brewery and repurposed the relics from the equipment. It’s a great example of a successful private development.

What project are you most proud of?
I think the Bark Park is a great accomplishment in that it was a pro bono initiative. I was approached by local residents who thought we could turn this eyesore of a vacant lot into something. So I started thinking, what can a dog park be? It can also serve as a public plaza and be an anchor for art and native plantings. The lighting and the signage can be sculptural instead of traditional. With that project, it was me at the table always pushing the design conversation. People at the city were skeptical, but it definitely works.

What are your dreams for Sacramento?
I love Sacramento so much. I really want to see change occur. I hope that we can continue building on the momentum that’s happening here. Other cities, like Seattle, for example, have selected landscape architects to lead the development of their public lands. All of the beautiful, vibrant public spaces in other cities are led by landscape architects. That’s not happening here. It’s frustrating, but it’s also an opportunity to keep working with the city to push the design conversation here.