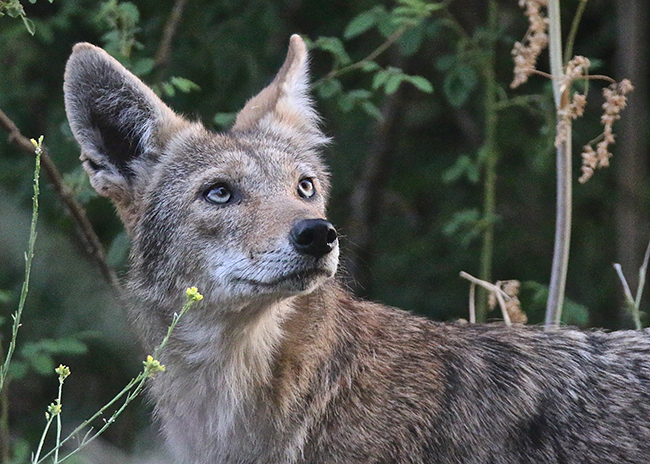 On any given day, it’s not unusual to find Carmichael’s Guy Galante wandering along the American River, watching, listening, tracking. A naturalist and Sacramento region’s resident coyote expert, he’s been documenting and photographing the coyote packs in our region for nearly 15 years. He knows them individually, and their family units, habits and unique personalities. And that’s important.

In our never-ending expansion of urban development, we see more and more healthy coyote populations where we live, work and play, and people aren’t sure how to respond to them. But Galante has a lot to teach us about coyotes.

I spent the morning with him in the American River Parkway for an up-close and personal introduction through Galante’s eyes to these intelligent majestic animals, and to learn how we—as individuals and a community—can responsibly and peacefully co-exist with them.

We set out along a trail looking for signs of fresh scat and tuning into the behavior of the animals around us for clues to the coyotes’ presence—the alarming shriek of a squirrel, the modified call of a scrub jay, a landscape that goes quiet. 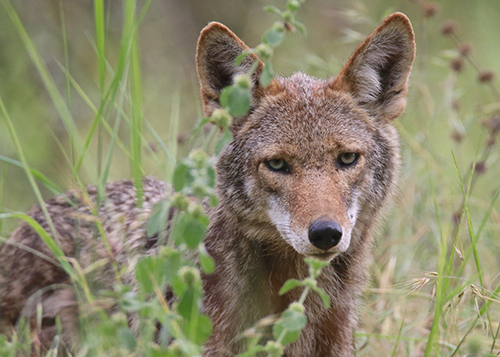 A bird plow catches Galante’s eye. A flock foraging on the ground abruptly takes to the trees. He diverts his attention away from the birds and looks for what caused them to flee. Up ahead he moves cautiously as we come upon a grassy knoll where the coyotes lounge sometimes—but today they’re not here.

He maps out the landscape for me, showing me the terrain that’s more difficult for coyotes to navigate and points out their path of least resistance along the base of the hillside we’re near. Then we find fresh scat. They’re here.

There are many people out today, so we dive off trail and settle into the grass out of sight. We’re wake hunting, he tells me, hoping we’ll intersect a coyote flushed out by human presence.

“Coyotes are doing the exact same thing. Some people think coyotes are following them but what they’re doing is paralleling them because they’re creating the same plow and the coyote knows that and is picking off what is fleeing them,” says Galante.

After an hour of waiting and watching, we get back on the trail. We traverse the parkway, backtrack, follow our hunches and logically assess the area. Still, no coyote. We settle on a ridge that gives us a good sightline of territory that butts up against the edge of the parkway, where coyotes are likely to be. 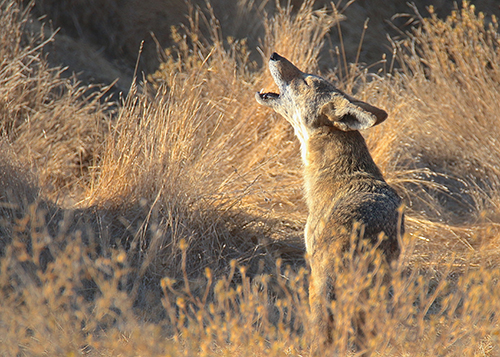 He tells me about them. Bolt, with electric green eyes who bolts the moment she sees a human; Her dad, Tux, with a white chest, who’s more relaxed and her mom, Notch, who’s a watcher of all things. The Howler, who howls every time he sees a dog, Mama Bear who’s always on the move, and one-eyed Jack, mangy and old, with whom Galante shared a special connection and hasn’t seen since July 12, 2019. He talks of their playfulness flinging feathers in the air, their athletic grace and their tender licking of each other’s faces. They come to life as he speaks and I scroll through their photos.

We talk about their encroaching presence into urban settings, a challenge familiar across North America. For more than 100 years, people have been trying to eradicate the animal across the continent but the adaptable canine just continues to grow stronger.

“If you want to change coyote behavior, you have to change human behavior first,” says Galante. “What people may not realize is, we’ve created the situation that has led them here in the first place.”

We need to ask ourselves what is our role in encouraging them into our neighborhoods, he says. It’s a timely question amidst the buzz as two coyotes were photographed chasing a cat in midtown Sacramento in February. “I don’t think they were here because of the cat,” he says. But the cat became an opportunity.

Simple changes in the way we live can make our neighborhoods less attractive to coyotes by removing the things they seek—food, water and shelter. Do you leave pet food outdoors? Are your bird feeders tidy? Do you harvest your vegetables and pick up fallen fruit?—staples in a coyote’s diet. Do you have a broken fence that allows access, overgrown landscaping that provides cover, leaky faucets that offer water? Are your compost bins wide open? Is your garbage accessible? 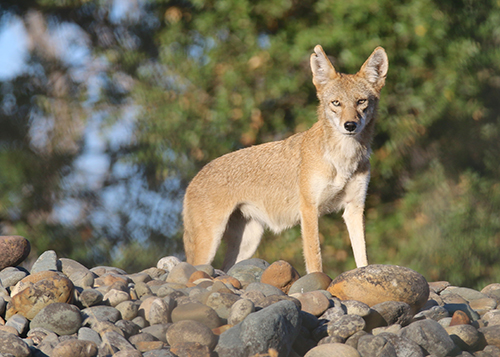 And when they do come around, do you know how to properly haze them? Bang pots and pans, squirt them with powerful water guns or a hose. The goal is not to harm, simply to discourage. But it won’t work unless we all participate and the neighboring community participates and so on, until we’ve implemented a cultural shift in how we choose to live, Galante says.

In Partnership with Project Coyote, Galante works with homeowners, HOAs, parks departments and environmental stakeholder groups to educate the public. He teaches how to assess neighborhoods, coyote behavior and ecology, and he introduces a coyote coexistence plan, a template from Project Coyote that cities across the country, like Davis, have adopted.

He’s also seeking grant funding for a project in Sacramento County that pinpoints where coyotes are sighted, employing citizen science to engage the community—and components to measure its success—so local officials can respond to hot spots with a coexistence plan that minimizes human-coyote interactions and addresses public safety concerns. 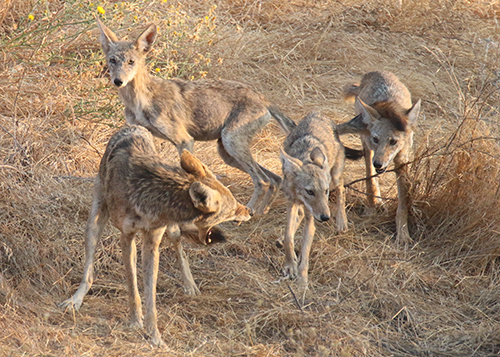 After five hours, we don’t see a coyote. Proof they are still elusive and wild, though I wonder if they watched us from the still of the underbrush. They’re a fundamental part of our regional heritage and our way of life that’s built upon the American River’s watershed and its rich biodiversity. Humans and coyotes call the same land home and we can return to a peaceful coexistence.

“It is a solvable problem and someone’s figured out a lot of the background work,” says Galante. “We just need boots on the ground to do it.”