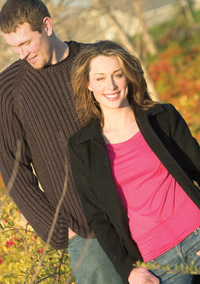 How Kings-crazy is Sacramento? It’s probably fair to say that most fans would blow right past our superstar governor just to touch the very long hem of any given player. These are men who can’t dine in a restaurant without attracting a crowd. They’re celebrities at their kids’ schools. Browsing at the mall, they’re likely to encounter a half-dozen shoppers wearing their jersey numbers.

But what of the women they come home to after all those rim-rattling dunks before frenzied, sellout crowds? Who are the wives who knew them when they were gangly college kids? The mates who have followed their careers the hard way: in a moving van?

We’re familiar with some of the wives of Kings past: Former center Vlade Divac’s wife, Ana, who graced Sacramento’s dining scene with Tunel 21 in Old Sacramento—which also spiced up the city’s nightlife—and L’Image in the Pavilions. Former guard Mitch Richmond’s wife, Juli, who already was a successful model when the two met and continued to model after the births of the couple’s children. And designer Jackie Christie (whom we planned to include in this article until hubby Doug was traded in mid-January), perhaps most famous for the “infinite love” hand signals she shares with the former guard-forward during games. Christie’s also a successful entrepreneur, having launched her own clothing line, Jackie Christie, Inc.

Here, we introduce you to the wives of two of our newer Kings players: Jackie Songaila, wife of Darius Songaila, and Heidi Ostertag, wife of Greg Ostertag.

Jackie Songaila, forward Darius Songaila’s wife of almost three years, understands what it means to be at the top of one’s game, and it has nothing to do with basketball. She was the No. 1 ranked junior tennis player in the South before she was recruited by Wake Forest University, which she attended on a full athletic scholarship. Oh, and she ran track, too. “Tennis, I had to work at,” she says, “but track, I’d just toe up to the line and go.” While still in high school, she won seven individual state championships, four in tennis and three in track. She even was North Carolina’s Athlete of the Year.

Tall, slim and blessed with a husky, honeyed voice, the 25-year-old Songaila arrives for an interview wearing pink and gray velour sweats that surely look on her just as the designer intended. She carries herself like a professional athlete, and no wonder. Her parents, a pediatrician and a county health director in tiny Kings Mountain, N.C., “had me in tennis every day after school from the time I was 8, probably to keep me out of trouble. From eighth grade on, I went to a tennis academy and played five hours a day.”

She and Darius met when he was a college freshman and she was a sophomore. “We were both athletes and traveled in the same circles. We were friends.” Darius, a native of Lithuania, had come to Wake Forest on a basketball scholarship after a year at an American prep school. His English was fractured but, says Jackie, “I thought he was really handsome—as anyone can see—and he was just a sweet guy.

“He didn’t have any money and I knew it, so whenever he asked me if I wanted to go somewhere, I’d say, ‘No, no, I’m fine.’ I was happy just to hang out. I think eventually he felt like he had to take me out on a real date. And—he’s going to kill me for telling you this—he borrowed $20 to take me out to eat. We went to Darryl’s. It’s a chain like Applebee’s. I didn’t know where he’d gotten the money, so I didn’t order anything. But I was starving, so I ate off of his plate the entire night.”

They became engaged just before Jackie graduated. After graduation, she taught school and gave tennis lessons while he finished his senior year. They were married in Kings Mountain in 2002. “The whole town was there, 500 people,” Jackie says, “and about 40 Lithuanians.”

Then it was off to Moscow, where Darius played for the Russian team Cska. “We lived near a train station. Every morning we’d wake up to this loudspeaker announcing ‘Good morning!’ in Russian.” The team coach insisted that players stay in a hotel the night before home games, and there were frequent road trips, so Jackie was alone a lot. “I wrote in my journal, watched CNN, e-mailed and went to the gym a lot. Every now and then, I’d call our agent and say, ‘You’ve gotta get us out of Russia.’ I missed my home and family so much.”

Now, after two seasons with the Kings, Jackie says, “I don’t think there’s a better town for basketball than Sacramento. The fans are absolutely the best in the country. They come to all the games and you see them in the community and they all say, ‘Hey, good job.’ The arena’s always sold out—that’s a perfect example. You don’t get that in every city, and here the fans take it for granted. We don’t.”

Although Jackie isn’t pursuing her own career right now, she has no trouble staying busy. This year, she is co-chair of the Kings Women’s Organization with Anne-Marie Petrie, wife of general manager Geoff Petrie. They’ve chosen WEAVE (Women Escaping a Violent Environment) as the recipient of their fund-raising efforts. She also is supervising the construction of their 4,800-square-foot house at Lake Norman near Charlotte, N.C. “No matter where Darius’ career takes him, that will be our home base.”

Then there’s taking care of Darius. “He does nothing around the house,” she says cheerfully. “We don’t have a maid or anything like that, so I’m always cleaning and doing his laundry.

“Darius’ laundry,” she says with a roll of her eyes, “I mean, have you seen him?” Here she stretches her arms wide. “He’s 6’9”, 250 pounds. I can probably wash only one pair of pants at a time, they’re so big.
“We want a family—at least three kids—so we’re at the point that when it happens, it happens,” says Jackie, who makes it clear that she’ll probably be the disciplinarian, while “Darius will provide the fun.” For now, the couple is honing its parental chops with a Weimaraner puppy named Zeus, the catalyst for a lot of long walks.

Asked if it felt strange to go from anonymity to being an interview subject, Songaila laughs. “In my little hometown, I was like the athlete of the century,” she says. “I was always being interviewed when I was growing up. So I was never in anybody’s shadow. I was never in Darius’ shadow. Plus, I don’t feel like Darius is famous.” And then with a sweet smile, “In our house, he’ll never be famous.”

Heidi and Greg Ostertag’s first date was a movie: White Men Can’t Jump. It was her sorority’s “Date Dash Night,” when each member is given just a couple of hours to find a date for that night’s mystery event. Heidi’s boyfriend of four years couldn’t attend but said he wouldn’t mind if she asked Greg. The 7-foot-2 basketball player accepted and off they went to the night’s surprise activity, roller-skating. When Greg’s size-18 feet outstripped any of the rink’s rental offerings, the couple bailed and took in the basketball movie.
“Greg didn’t know I had a boyfriend,” says Heidi. “He thought [our date] was serious, but I was just doing it as a friend thing.” Before long, however, it was serious. Heidi broke off her relationship and began seeing Greg exclusively. “I’d never dated anybody like him before,” she says. “He’s just this good ol’ boy, and I’d always dated the fraternity, preppy types.

“I went from one extreme to the other. My other boyfriend had been very serious, very worried and very uptight. And when you’re thinking of being with someone the rest of your life, you start asking whether that’s what you want.

“I was really drawn to Greg’s personality and sense of humor. He just didn’t care what people thought. There’s something very refreshing about him. Sometimes I’ll think, ‘I can’t believe he just said that.’ And then I have to remind myself that that’s what attracted me to him in the first place.”

When we caught up with Heidi for a telephone chat, it was just after noon and she was preparing breakfast for Greg, who joined the Kings this season. Breakfast at noon? “They had a game last night,” she explains, “and he’s too wound up to go to sleep until three or four in the morning. It would be like you or me taking a spin class at 9 at night and then trying to get to sleep.”

Heidi grew up with two younger brothers in Indiana before her family moved to Arizona during high school. “I got my Midwestern values before moving West,” she laughs. Her mother worked for Harley-Davidson and her dad owned a company that developed software systems for nursing homes. She met Greg at the University of Kansas, where she had transferred to be closer to the ill-fated, aforementioned boyfriend. She had a part-time job in the athletic department as a class checker, meaning she checked up on the athletes to see if they were attending class.

One night, well into their relationship, Greg showed up at Heidi’s sorority house to take her to dinner. “He was dressed up,” she says, “and he never dresses up. Then he got down on one knee and proposed in front of everyone in my sorority.” Did the public pressure influence her response? “I didn’t even think twice. I said ‘yes.’”

They were married a few months later in a small ceremony at Greg’s parents’ house in Duncanville, Texas. Within a few years, Greg was playing for the Utah Jazz and they were parents to a baby boy, Cody. The Jazz are known for their players’ long tenures, and Greg’s was no exception. He stayed for 10 years.
While living in Park City, Utah, they expanded their family by two when Bailey, now 7, and Shelby, 5, were born. It was there that Heidi, who’ll turn 36 March 9, took up the grueling sport of adventure racing, in which teams of four compete in a variety of sports—mountain biking, paddling, skiing, orienteering, trekking and cross-country skiing—on courses of up to 450 miles. Each race is different. “I’m a multisport athlete,” she says. “I’ve never been great at any one sport, but I’m good at a lot of them, so this is perfect for me.”

Once Greg signed with the Kings, Heidi had just two weeks to find a house in Sacramento. She combed the area and settled on a house in Granite Bay that’s 2,000 square feet smaller than their Park City home. “I came with a certain budget, thinking we could get a lot more, and I was quickly shocked. I still think we’re in an overpriced house, but now I really like it,” she says.

Since settling into the Sacramento scene, she’s become involved in the Kings Women’s Organization and has been pleased to learn that it’s a genuinely philanthropic group. “These women get out into the community and really do something important. That hasn’t been my experience in the past.”

The Ostertags enjoy travel in the off-season and frequently visit family in Texas and the Midwest. (“My kids are awesome travelers,” says Heidi. “I’m going to write a book.”) Ten-year-old Cody has developed a passion for basketball, both for watching Dad play and playing himself. Good thing: The Ostertags had the youngster’s growth plates X-rayed and discovered he’ll probably top out at 6-foot-11.

Heidi seems happy to see Greg’s career playing out in their newly adopted city. She doesn’t even mind that their Sacramento-area home, unlike their mountaintop Park City residence, is cheek by jowl with others in their development. “It’s our first neighborhood. We just got lucky and moved into the most awesome [one],” she says. “I have more friends here than I’ve had the whole time we’ve been in the NBA.”