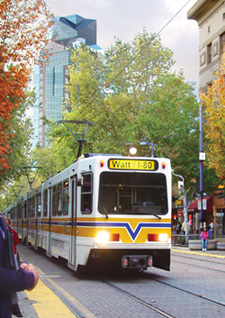 How does our light rail system stack up against light rail in other cities?

We are one of the largest light rail systems in the country, and our ridership has grown tremendously over the past several years. This month, we will complete our light rail extension to the historic Amtrak Depot, which will provide direct access to regional rail service and make the direct connection to Amtrak national passenger rail service that can take you all over the country. There aren’t a lot of places that can boast of that kind of network. At the same time, with the tremendous regional growth and air-quality challenges facing our region, we still have a lot to do.

We are doing safety and accessibility improvements at the 13th and 16th Street (light rail) stations on R Street. We’ve got a lot of partners there, including CADA [Capital Area Development Authority], the city of Sacramento and SACOG [Sacramento Area Council of Governments], which has helped us with funding through the community design program. We’re constructing pedestrian crosswalks at 16th and replacing and repairing sidewalks on 15th and 16th streets. Because 16th Street is a gateway station for us, we’re making it more of a signature station. We’re putting in new platforms and replacing old lifts with new accessibility ramps, and we’re putting in new landscaping and better bus shelters. At 13th Street, we’re doing new sidewalks, new lighting and signage. So this is a major refurbishment, which is very much in keeping with the revitalization of these neighborhoods.