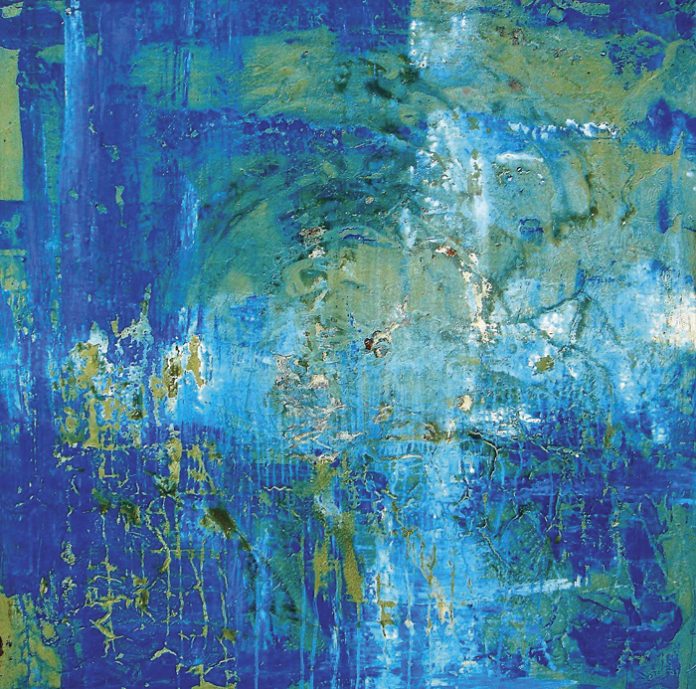 Several years ago, William Ishmael took a class from watercolorist James Estey and brought some of his landscapes to show the teacher. The Placerville artist weighed in swiftly once he saw Ishmael’s precise perspective.
“He said, ‘Are you an engineer or something? You need to loosen up,’” recalls Ishmael, who is, in fact, a civil engineer with a graduate degree in urban planning.
Neither he nor his art would be the same again. Ishmael shifted to larger canvases, gravitated from watercolors to mainly water-based latex house paints, and adopted an unabashedly abstract and personally liberating style.
Ishmael lays most of his surfaces flat before pouring paint on them, then lets time or the elements have their way. He’ll leave a painted canvas under a Japanese maple for a week in the dead of winter and see what falls. (“It’s rain; it’s leaves; it’s bugs,” he says.) He’ll mix sand with paint, turning a jet hose on the piece for an erosive effect. He even has painted burlap on wood, added sticks and leaves, soaked the project in lighter fluid and set it aflame.
“I almost always start out with an intention,” says Ishmael, a Zen devotee who often incorporates mandalas and other circular shapes into his designs. “But I very seldom end up with that intention.”
Ishmael, 63, has developed a robust following since his first exhibit for gallery owner Pamela Skinner in 2004, and his paintings hang on a number of local notables’ walls. But he hasn’t quit his day job; Ishmael still works (though just part time) for Nolte Associates. He also is incoming president of the Sacramento Tree Foundation. Visit iamishmael.com to learn more about his art.