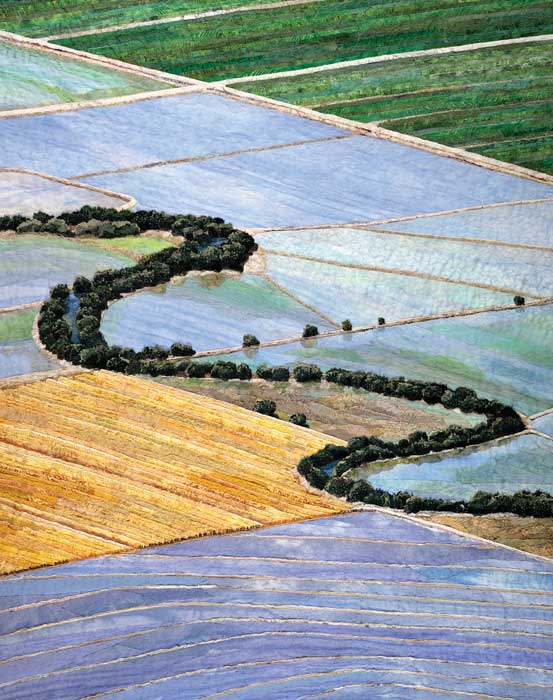 Merle Axelrad Serlin was a successful and pregnant architect when she made her first quilt, a predictably sewn coverlet of black, gray, pink and green that she finished the day before her son was born. “It was a dog . . . god-awful,” she recalls more than a decade later. But Serlin was clearly a quick study with no dearth of talent. She took a quilting class, won a few awards and switched to quilts as wall art.
With a little tinkering, Serlin developed a layering technique that let her bring more color, light and texture to her projects. She calls it “fabric collage,” and one of her most recent works is a stunning example. In “California Ricelands,” a Sacramento Valley farmscape commissioned by the California Rice Commission, Serlin uses hundreds of pieces of material—some hand-painted or -dyed, others fresh off the bolt from the local fabric store. A golden field is executed in velvety chenille; the flooded paddies are in soothing shades of blue and green.
“People describe this as painting with fabric,” she explains. “But I see it more as a blending of painting and sculpture because it is a three-dimensional medium.” Serlin’s pastime became full time in the late 1990s, when she landed a contract with the California Environmental Protection Agency to complete eight landscapes for the agency’s downtown headquarters, depicting the heights of Mount Shasta to the Monterey Bay Canyon. Other commissions—public, hospital and private—have streamed in ever since. Her studio, on the second floor of the Art Foundry & Gallery at 10th and R streets, opens for Second Saturday every month. Visit axelradart.com.