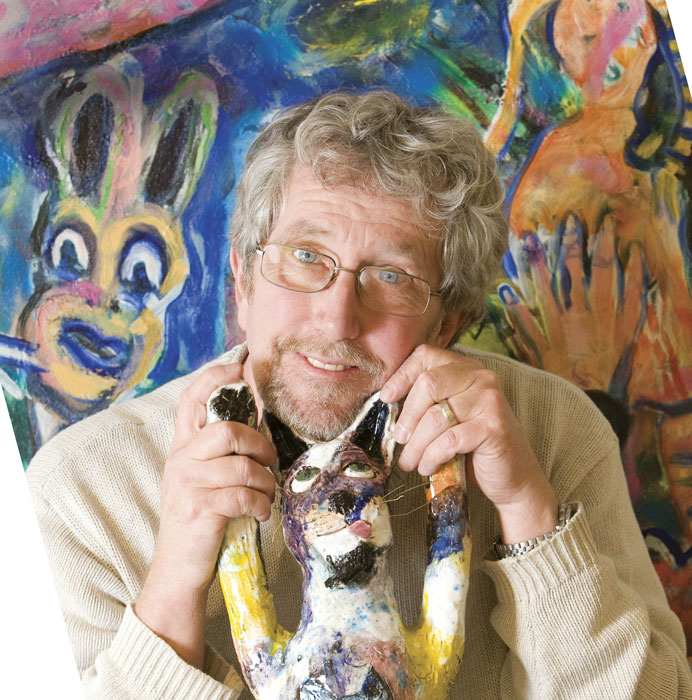 As a young man, the “exhausted struggle” was Gary Dinnen’s hallmark, and narrative expressionism his genre of choice. He saw himself as an inventor, the Sacramento artist recalls, and thought he was the one in control. Then Dinnen reconnected with his Christian faith. His work—most notably his whimsical ceramics of cats and dogs—has radiated joy ever since. “It was a relief for me to change,” he says. “Now I just explore what’s already being created.” Dinnen works in a basement studio next to Trinity Lutheran Church in midtown. He has been Trinity’s sexton, or caretaker, for years and runs a weekly basketball game in the church gym. Though he also paints, clay is Dinnen’s mainstay. And animals, anthropomorphized, are his favorite subject. “I can comment on the way I see the world and our culture by using animals,” he explains. “The figure doesn’t get in the way.” Dinnen’s two Australian cattle dogs often are underfoot as he creates. He and his wife also have two cats. Thirteen of his ceramic cats are on permanent outdoor display in downtown Woodland’s historic Dead Cat Alley. Another one is perched by the Sacramento Community Center Theater. Forty critters were on exhibit recently at the Solomon Dubnick Gallery in midtown—and sold briskly. Dinnen also works in art conservation, helping install exhibits at the Crocker Art Museum and tending to the city’s public artwork. He is years removed from his moody artist days. “I just try to enjoy myself so when people come in contact
with my art, it’s joyful because—guess what—life is a treasure,” he says.