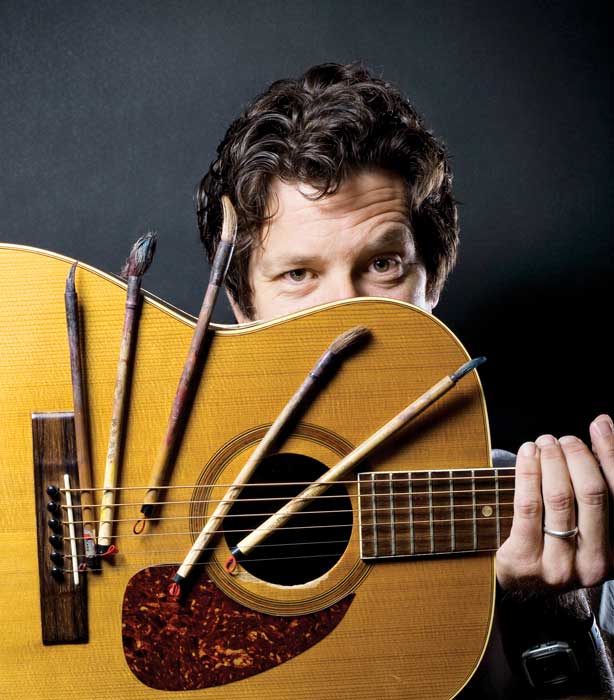 Douglas Newton is a 21st-century Renaissance man. He holds a literature degree from UCLA, writes poetry and once covered the walls of his Asian flat with drafts of a book in progress, which he forced himself to revise and rewrite for hours on end. A singer and guitarist, he busked in the streets of Paris and the subway tunnels of Taipei, and performed regularly with his English-language folk band for many of the years he lived and taught in Taiwan. The 43-year-old speaks Mandarin Chinese, French and German, blogs about local artists and has exhibited his photography. A California native, Newton moved to Sacramento in 2007 with his Canadian wife to be closer to his family. Since losing his office job last summer, he has trained his energy on his music and artwork. The latter is a series of simple yet striking landscapesâ€”abstracts steeped in Asian overtonesâ€”that he mainly paints with block-printing ink. His inspiration du jour: a coffee table book of National Geographic photographs. â€œSometimes I have an idea and feel like Iâ€™m fulfilling it,â€ he says. â€œOther times . . . is my hand leading the brush or is my brush leading my hand? I love that sense of discovery and freedom on the fly.â€ Newtonâ€™s paintings are the focus of a pair of solo shows: the first takes place this month at Blue Moon Gallery, 2353 Albatross Way in Sacramentoâ€”also the site of Newtonâ€™s CD release concert and party on June 26. The second show is set for July at Bogle Vineyards in Clarksburg. For more information, or to link to his blog, visit douglasenewton.com.