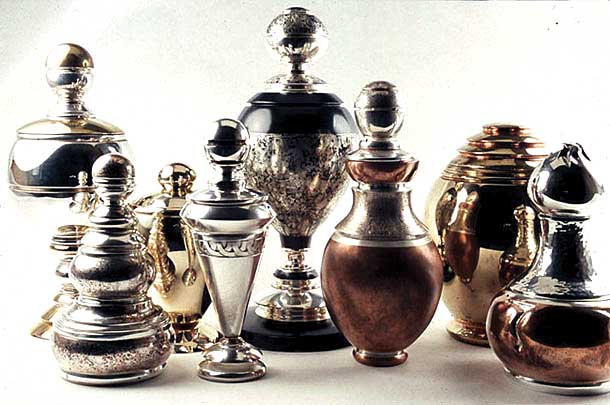 Metal artisan Daniel Frye calls his sumptuous assemblage “Spirit Jars,” with each container representing a human attribute. At eight inches tall, “Narcissism” stands above the rest and is a striking mix of black and silver, with two
smaller replicas of itself tucked inside. “Prosperity” is goblet-shaped. And while most of the nine jars have knobs that remove easily, “Determination” is tough to open. All center on the “exploration of our humanness,” says Frye, which he thinks we give short shrift in these techno-driven times.
Frye chairs the art department at Sacramento State. His father hoped he’d study physics in college. Frye preferred the arts. His dad suggested a practical compromise: art education.
That turned out to be sage advice. Frye took a metals class as an undergraduate and was hooked. He received his doctorate from Syracuse University, where he also was an African American Studies fellow. Many of Frye’s works in those days were what he calls “racially based.” One standout project: a chess set of African heads carved out of nickel silver, brass and copper.
Frye’s first full-time teaching position was at the University of Missouri. “The Vessels That Hold Lies”—a response to the backbiting environment among his peers there—is composed of four distinct metal containers made of sterling silver, copper or brass. Each is suspended from chains in its own metal box.
Frye makes a distinction between crafts and art and urges his students to do so.
“As a craftsman, I have to pay attention to the medium,” he explains. “If it’s made well, then I am talking to a larger audience than one.”