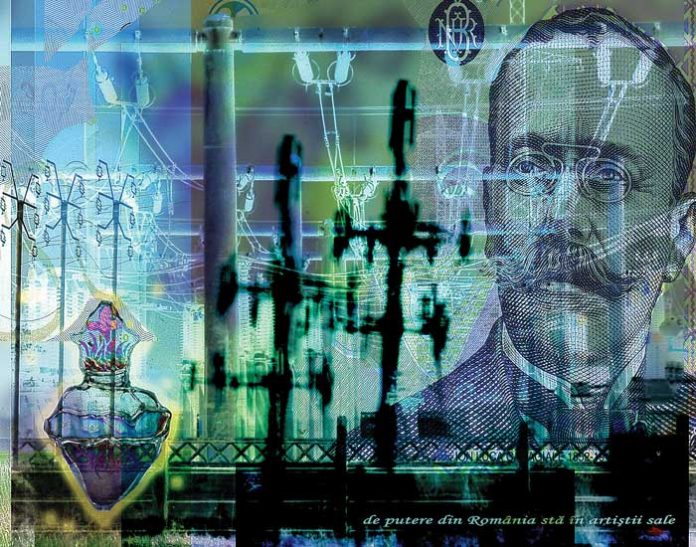 It rankles Ann Tracy when people turn their noses up at digital art, a genre that the North Sacramento artist maintains is no less “real” than the more conventional variety. “I use exactly the same skill set that I had when I was sketching and painting, but I’m using different tools,” she says.
Tracy layers eight to 12 images at a time (most of them her own photos) and edits them with the aid of a digitizing tablet and stylus. She usually prints the finished product on canvas and adds acrylic paints.
The result: eclectic yet thought-provoking composites that fall under any number of series, from motels to lotuses to the “Potency of Memory,” based on a cache of old family photos. In one of the memory series’ works, Tracy incorporated images of her mom as a child, Venetian cherubs, a church from her Boston-area hometown and part of her own bespectacled face.
Electrical infrastructure is another favorite theme. “The Power of Romania Lies in its Artists”—included in the 2011 American Art Collector (Alcove Books)—melds pictures of Eastern European power lines, a piece of stained glass and the looming visage of Romanian playwright Ion Luca Caragiale, who appears on the nation’s banknotes.
Tracy worked in radio news before turning to graphic design and, eventually, digital art. She loves the interplay between the disparate and the mundane. “It’s magic,” she says, “to take images people think don’t contain any beauty, and do my digital alchemy and make something of beauty.”
Tracy will host a show at her studio Dec. 4. Visit ann-tracy.artistwebsites.com for more information.