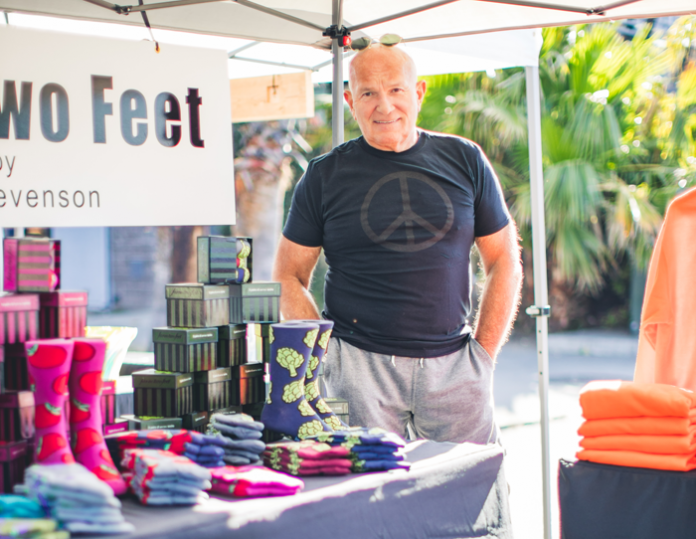 Catching up with the founder of sock empire Trumpette.

When Jon Stevenson, founder of the wildly popular children’s sock brand Trumpette, sold the company in 2017, you’d have thought he would kick up his stocking feet and relax a bit. But Stevenson is not one to sit still for long. When he’s not at his vacation home in Puerto Vallarta dreaming up new products to sell, he can be found at the Midtown Farmers Market on Saturdays, cracking off-color jokes with shoppers and hawking his line of men’s socks and other accessories.

“My partner retired and I rewired,” explains the effervescent Stevenson, “so I went back to my roots, which was menswear. I just have to stay busy.”

Stevenson’s market booth is a handsome display of his personal designs, many of them in keeping with his salty sense of humor. He penned a riotous line of greeting cards (the messages of which are mostly unprintable in this magazine) that would make a Hallmark copywriter blush. “I call them my nasty, funny cards,” he quips. “I’m sort of known for that.”

Stevenson also came up with the phraseology on his best-selling T-shirt: Make tacos, not walls. “I’m not even political, but I don’t support the wall,” he explains. “It was just an idea I had when I was in Mexico, so I started making it and it just took off. The sales have been unbelievable.”

He also sells charming market bags made with striped fabric from European grain sacks, leather-handled woven baskets, and men’s and women’s Hermès look-alike sandals, which are made across the street from his residence in Mexico.

And of course it wouldn’t be a Jon Stevenson venture without socks. His Farm Two Feet line features bold graphics of vegetables—eggplants, artichokes, tomatoes—that fit right in with his market surroundings. “All of my stuff has a sense of whimsy,” says Stevenson. “And if it’s not whimsical, it’s nasty!”

The best part of his post-Trumpette life? “Creating all of it,” he says. “My mind never shuts down. I’m always creating.” Stevenson also delights in the lively hum of the outdoor market. “It’s a lot of fun. I did merchandizing for Macy’s back in the day before I opened my own stores in San Francisco. I love that whole energy of retail, of being a merchant. I was born to do this.”