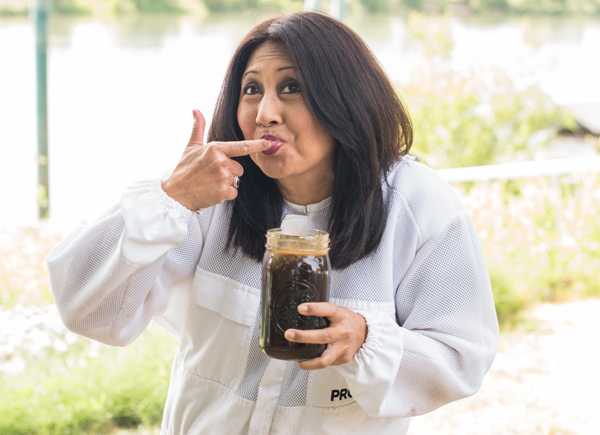 The homeowner stopped cold when he stepped into his Sacramento back yard. There, clustered on a limb of a tall fir tree, was a writhing swarm of softly buzzing honeybees—thousands of them. He dashed inside and called a pest control company, which referred him to the Sacramento Area Beekeepers Association, which gladly makes house calls to resolve swarm emergencies.

A member arrived and was soon zipped snugly in her beekeeper’s protective suit. 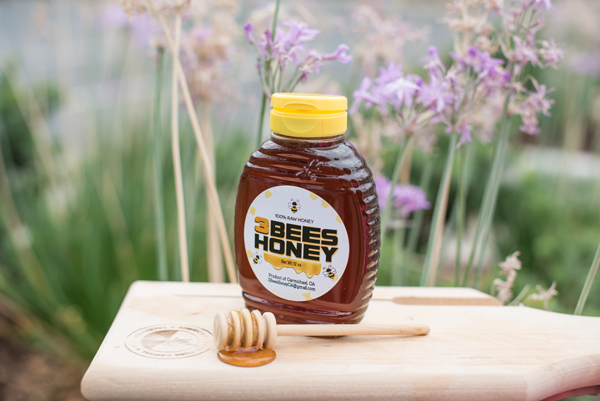 She set up a ladder, then positioned a wood “brood box” beneath the swarm. The idea was to grab the tree limb and give it several sharp tugs, dropping the bees into the box, along with the queen. Bees form swarms to protect their queen, which is buried somewhere beneath thousands of other bees. Get the queen bee into the box and the rest will follow.

The beekeeper yanked the limb and most of the swarm dropped. The others buzzed around in confusion, but later followed. Once the bees were securely boxed, she drove them to a farm to begin their new lives. 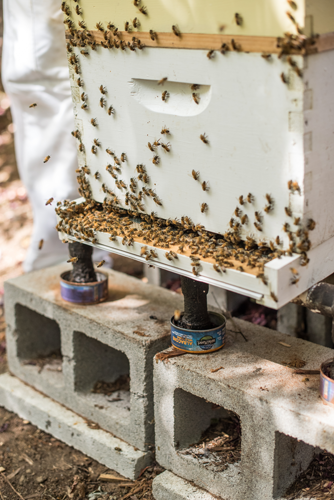 And that’s how Tina Macuha saved thousands of pollinators from an uncertain future.

Macuha is best known for her 24 years as anchor/reporter on CW31’s “Good Day Sacramento,” and her restaurant-review segment “Dishin’ With Tina.” Her friends also know her at a songwriter-singer-percussionist for the band Iola Rose.

“I got into it five years ago when I did a story for ‘Good Day,’” she says. “I was fascinated and thought, ‘This is really cool, I want to try it.’ I bought some hive starter kits and a package of 10,000 bees and a queen. It’s an expensive hobby. You hope they survive.”

Now she maintains five hives on a rural property near the Sacramento River, which produce her Three Bees-brand honey.

“I don’t know how many bees I have because they keep multiplying,” she says. “A healthy queen lays up to 1,000 eggs a day. The hive keeps growing—or you hope it does.”

Nature has a plan for that. One cause of swarming is hive overcrowding, which leads the current queen and about half the colony to fly away on a mission to find a new home (a successive queen to rule the hive is readied before their departure). That’s how bee colonies multiply. 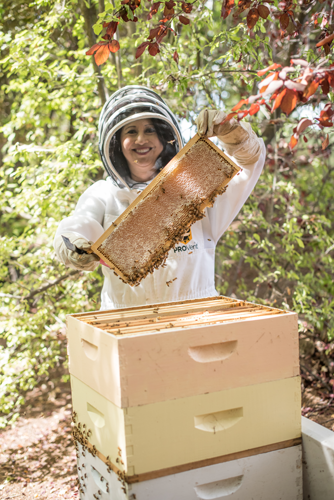 Swarms aren’t particular about where they stop to reconnoiter during their house hunt. Trees are a favorite, along with house eaves, utility poles and cars.

“People often panic when they see swarms, but the bees are in calm mode then,” Macuha says. “The message is: Call us. There are a lot of beekeepers in the area and we’re texting each other all the time.”

The most gratifying part of beekeeping, Macuha says, is “just watching the bees and learning. They communicate so well, telling each other where flowers are located. It’s like GPS.”

Can humans take lessons from bees? “I think so. There’s structure to how they live, and they instinctively know to get along,” she says.

The biggest threat facing Macuha—and beekeepers worldwide—is battling insects’ dramatic decline from colony collapse and the parasitic varroa mite. Forty-six percent of the global bee population has vanished over the past decade, according to an analysis in the journal Biological Conservation. “But the average person doesn’t think about that,” Macuha says. “Maybe they should.”

Tina Macuha’s Three Bees wildflower honey is sold at Corti Brothers and Chili Smith Family Foods. For beekeeping help, go to sacbeekeepers.org and click on the swarm collection page for a list of phone numbers.