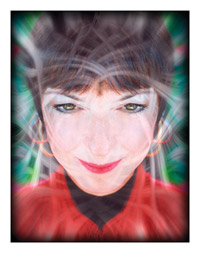 A note to the skeptics: Carol Ritberger never sought the “woo-woo” world—it sought her.

“I didn’t initially want to have anything to do with this woo-woo world at all,” says Ritberger, a medical intuitive also known as the “color lady” (she wrote the 1999 book What Color is Your Personality?). Although it’s a world in which she’s found unusual success—including her latest venture, the Ritberger Institute—the happy lady who welcomed me into her spacious, sky-lit Cameron Park home for this interview wasn’t always quite so happy.

“It’s been a long and difficult journey,” confides Ritberger, who, at 58, cuts a striking figure with her dark, short-cropped hair and bright smile. But the smile fades away as she rewinds the tape to 1981, when a cataclysmic event caused her carefully constructed life to come crashing down.

Until then, things had been going according to plan. She was 37, married with a daughter, living in Placer County and building a thriving clientele as an independent corporate consultant.

But life can change on a dime, and within the space of two short weeks, Ritberger thrice danced with death. First was a near-miss auto accident that killed several teenagers. Days later, Ritberger accidentally left her purse on top of her car, headed onto Interstate 80 in Roseville, saw its contents scatter across the lanes, pulled over and ran into the road to gather her belongings—not realizing that an 18-wheeler was heading her way. Mercifully, the driver stopped just in time.

But fate apparently had not completed its course, and it was the third event that would put an end to the life she had known. After dining out with friends, she experienced what seemed to be a mild food reaction to something in the meal (she doesn’t know what)—an oddity, as Ritberger had no known food allergies. “I felt like my throat was tightening, and I fainted,” she recalls. She then went home and went to bed, and around 2 a.m. was awakened by a voice that told her she needed to get up and go to the hospital. “I’d never heard voices in my head before,” says Ritberger, who was home alone at the time. “I didn’t know if I’d been dreaming, or what.” But when the voice told her she was dying, she felt she had no choice but to drive herself to the hospital.

What happened next, according to Ritberger, is best described as an out-of-body experience, although she herself didn’t know it. “I remember being above my body and watching everything happen on the emergency table, hearing them saying, ‘We’re losing her, we’re losing her—get her back.’ And I remember thinking, ‘You didn’t lose me—you’re just looking in the wrong place.’ So I was in this kind of transitional time, and that’s when the near-death experience happened.” She remembers three “balls of light” that told her they were going to be with her until she made a choice, and when she asked, “What choice? Didn’t I die?,” they said, “Technically, yes. But that isn’t final.” Later, she says, doctors confirmed that her heart had stopped.

But the scariest part was yet to come. When Ritberger opened her eyes, she couldn’t see anything but light.

“I couldn’t see anybody,” she says. “I could just see light. I could see color. The light would move; it would get big; it would get small. When people would talk, the light would change color.” Doctors theorized that trauma had triggered Ritberger’s altered visual state, and that it would go away.

The doctors were wrong. Although Ritberger’s sight did return, it came with a “bonus”: She continued to see a luminous vapor of light, or aura, around every living organism. “The light is always there,” says Ritberger. “I can’t turn it off.” She also can take it to another level, describing herself as “a human CAT scan or X-ray” when she works intuitively with people. “I can see patterns of energy and colors that can tell me if specific parts of the body are malfunctioning,” she explains, cautioning that she does not consider her work a substitute for conventional medicine and that she does not offer definitive diagnoses. “I’m very pro-medicine—very pro-doctors and technology,” she says. “I just offer another perspective.”

But it took years of research and study for Ritberger to understand what she was seeing and to accept her permanently transformed self. In the early aftermath of the event, depression held her in its grip as she struggled to make sense of things and move forward with her life. “I would literally pray that it would go away,” she remembers. “It was not a gift—not at the time. I withdrew. I became a hermit. I pulled in and thought, ‘I’m not going to talk to anybody about this.’” Her marriage collapsed under the strain, and carrying on in the corporate world, where she provided team building and communications training, became a near impossibility. “I would be standing in front of a roomful of people, trying to teach, and I’m watching all this color,” recalls Ritberger, whose original training was in psychology and personality typology, specifically the Myers-Briggs Type Indicator. “I am a scientist,” she says, her voice rising with conviction. “To go from being logical and grounded to a point where I felt like I just dropped out of the sky was a struggle, a constant struggle.”

Yet she trudged on, holding onto her corporate clients while embarking on a quest for understanding. “I was walking in both worlds simultaneously,” she says. “I was still doing corporate work, and at the same time, I was doing research, working with really bright minds in the behavioral medicine world.” She read everything she could get her hands on, including the work of pioneering metaphysicist and medical intuitive Edgar Cayce. But there were still questions that went unanswered, so Ritberger began connecting the dots herself, combining her knowledge of personality and neurology with her new understanding of colors, auras and chakras. “I just started doing overlays,” she says, in an effort to simplify a very complicated topic.

Six years after her near-death experience, Ritberger began using her newfound skills as a medical intuitive, setting up shop “in a little boxcar in Folsom. I was a happy camper. I was doing readings, my practice was growing, people were getting something out if it, and they were talking to their doctors, and their doctors started coming to me with questions.”

It was a courageous step—one she could not have taken, she says, without her husband and professional partner of 20 years, Bruce Ritberger. “Bruce was the one who helped to push me out there,” says Ritberger. The couple met in 1983 when Bruce, then a financial manager and partner at an advertising agency, invited Carol to speak about personality characteristics at a fund-raiser for the American Cancer Society. “We started working together, and we just really clicked,” remembers Bruce, now 70. “But we were both married to other people at the time.” Ultimately, they decided that “life is too short to spend it in the wrong place,” Bruce says, and in December of 1984, the couple married.

Throughout the next decade, Ritberger continued her never-ending search for answers, which led to a doctorate in religious philosophy from Interfaith Education Ministries, a private, nondenominational seminary. “I was trying to define spirit. Was spirit God? Was spirit energy? Was spirit soul?” In the end, she discovered that while spirit cannot be defined, it is through that part of ourselves that healing happens. “If you talk to spirit—or whatever word people are comfortable with—and they can connect with that part of themselves, that kind of higher connection, that’s the healer.” The key, Ritberger found, is finding the word that people use to relate to that part of themselves.

Despite her deepening devotion to spiritual study, Ritberger didn’t cut the corporate cord completely until 1995, when the death of a 6-day-old granddaughter from a cerebral hemorrhage served as the ultimate wake-up call. “I decided after Stefani’s death that I would finally commit to what I agreed to do when I died: To accept the intuitive gift I was given and use it to the benefit of those in need who sought me out,” she says. Although she no longer conducts private readings, Ritberger holds monthly group sessions at the East/West Bookstore in Sacramento. She’s also sharing what she’s learned with her students at the Ritberger Institute, co-founded in 2000 with husband Bruce, who oversees the business.

Describing the school’s curriculum as “soul-directed, as that is where all true healing begins,” Ritberger says it’s a place where people can discover themselves and change their quality of life. “Our goal is to assist students in their personal and spiritual evolutionary process.” A master’s in intuitive diagnostics, a Ph.D. in esoteric philosophy and hermetic science, and personality certification training are among the professional offerings, and a number of personal development programs, workshops and intensives also are taught. The institute uses hotel meeting rooms for its classes.

As if that’s not enough, Ritberger still finds time to write: Her third book, Love: What’s Personality Got To Do With It?, is due out in 2006. While her first book, Your Personality, Your Health (1998) integrates a “a lot of esoteric work into it,” Ritberger says that her latest book,  What Color Is Your Personality?, is more mainstream.

Being able to reach mainstreamers and “woo woos” alike is one of Ritberger’s greatest gifts.
“Her teachings have given me a fresh way of looking at people, and she helps me to remember very simple things, such as that we’re all spirit first and human second,” says Marcia A. Hillary, Ph.D., a holistic psychotherapist and a member of the Institute’s first graduating class in 2004. “But I plan to continue studying with Carol. The work isn’t done.”

And Ritberger would probably be the first to tell you that it never is.
For more information, visit ritberger.com or ritbergerinstitute.com.

How Their Gardens Grow: N’Gina Guyton

Photography by Debbie Cunningham - September 30, 2020
Near me
40 miles