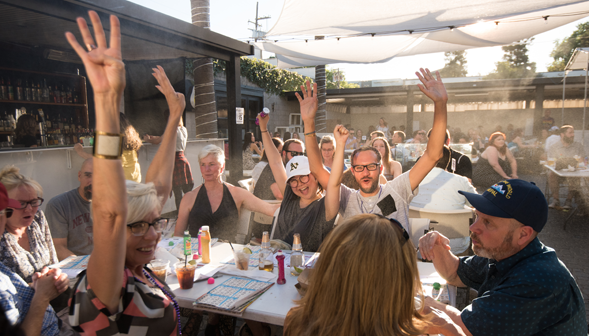 There are few places in Sacramento more raucous than Mango’s Burgertown on the first Thursday night of the month. That’s when the Lavender Heights nightclub/restaurant hosts Drag Queen Bingo, quite possibly the city’s rowdiest, raunchiest—and arguably most fun—charity event.

Games don’t get underway until 7 p.m., but you’ll find hard-core enthusiasts lining up as early as 5 o’clock with their $20 cash cover charge in hand. For that modest sum, guests are entitled to play eight games of bingo and take in one of the most entertaining live acts in town.

The star of the show is the fun, flirty and fabulous mistress of ceremonies, Do Me Moore, played to ribald perfection by Paul Crouch. She calls out numbers, announces winners and makes racy jokes, all while sashaying around the premises in sparkly platform heels and a skirt up to there.

“Basically I come in, greet everybody and get them riled up,” says Crouch. “I love helping other people raise money and have a good time doing it.”

Audience members, meanwhile, are no passive observers. They participate by shouting out “callbacks”—“B11, legs to heaven” is one of the tamer ones—throughout the games. “They’re all fun and campy,” Crouch says of the callbacks. Players who call out bingo erroneously get spanked by the emcee. There’s also a drawing in which winners select an item from the infamous Bag of Crap. “As we always say, this is not your grandmother’s bingo.”

While that may be true, it’s not to say that drag queen bingo isn’t family friendly. “I used to bring my mom and dad all the time,” says Fred Palmer, who founded the event in 2009. (Since 2015, it’s been operated by the Sacramento Rainbow Chamber of Commerce, where Palmer serves as executive director.)

Jason Verwoest, a regular at the event, recently attended with his fiancé and their respective parents. “It just gets bigger and bigger every time we come,” says Verwoest. “We always have a lot of fun together.”

Beyond the good times, drag queen bingo is a force in the fundraising world, having helped a variety of local charities raise more than $260,000 over the past decade. The game nights are also about building community and promoting understanding.

“We didn’t invent the concept; there are drag queen bingos all over the United States. They’re popular, they’re fun, they’re loud,” Palmer says. “We started it in Sacramento because we wanted an opportunity to build bridges with all the different parts of the LGBT community and our allies.” In that respect, you might say everyone’s a winner