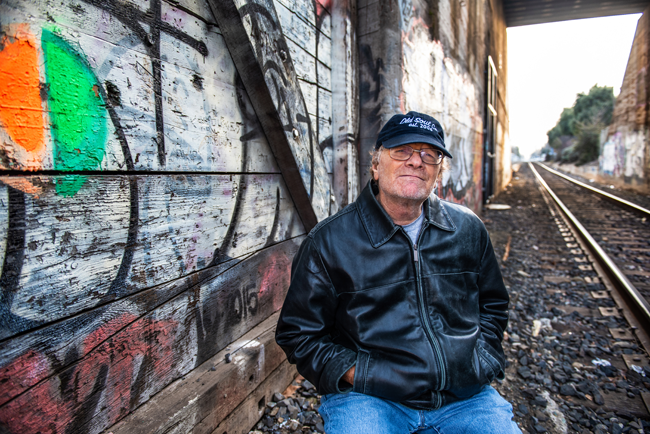 Andy Furillo, author of the recently published novel “The First Year,” is a sort of hard-bitten, old-school journalist version of Lady Bird. He adores a certain part of Sacramento’s narrative and architecture: its old houses, its gritty blue-collar bars such as Benny’s—beloved watering holes for the journalists of his generation—its sometimes raucous, always unpredictable street life, its noisy freight trains and its behind-the-scenes political machinations.

In “The First Year,” a narrative about a local sculptor, several investigative journalists and the Russian mob, set against the backdrop of President Donald Trump’s first year in office, Furillo takes his readers on an evocative and nostalgic journey through the city of Sacramento.

Furillo was a beat reporter at newspapers up and down California for close to half a century. For the majority of those years, he worked at The Sacramento Bee, covering everything from sports—his father went from the midnight shift at a steel mill after world war two to being a leading sports journalist in Los Angeles, and Furillo inherited his passion for team contests—to politics, crime, punishment and goings-on at the federal courthouse.

But all good things come to an end. After the recession, the newspaper industry was in full-on crisis, and journalists were being let go left, right and center. Furillo, after the 2016 election, was deeply unhappy with business as usual. The night of the election, he recalls, he was covering a Kings game at the new arena for The Bee. “It was a shattering experience. I knew right then that writing about sports was no longer tenable. I couldn’t justify it. What remaining life I had, to have it channeled into sports at this existential moment . . . I wanted to become more actively involved in undoing this presidency.”

Within a few months, Furillo had accepted a buyout. He began doing political volunteer work, started a new job with the State Building Trades and Construction Council of California—“a good organization, trying to preserve what’s left of the blue collar middle-class in America”—and, at breakneck pace, wrote his novel based on corruption in the Trump era. “I wanted to get out the anger that I had. It (the book) was a great release.”

The book is now on sale on Amazon and at the Avid Reader bookstore. And, never one to take things slow, Furillo is now writing a sequel to “The First Year.” It, too, will be set in Sacramento.