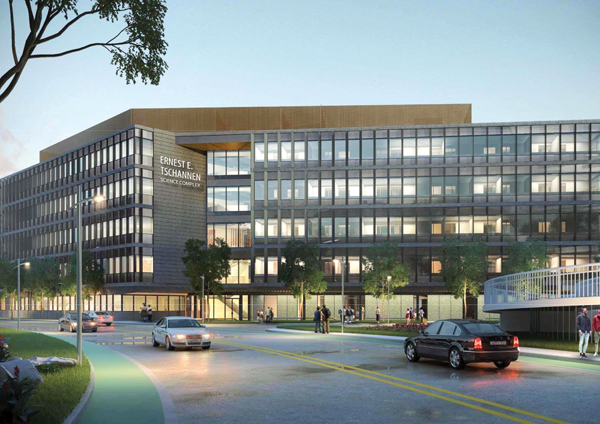 Standing tall on the Sac State campus, just south of the Guy West Bridge and near the Hornet bookstore, the Ernest E. Tschannen Science Complex makes its grand debut this month.

The five-story complex will feature a 120-seat planetarium (with a 2,500-square-foot dome), 10 research and 20 learning labs, an observatory with a retractable roof and two 120-seat general education classrooms.

“The planetarium will host shows open to the public one weekend a month, at least initially,” says Anita Fitzhugh, Sacramento State public information officer. The planetarium’s schedule for fall should be available by opening day.

The $91 million complex, for which planning began in the early 2000s, is the first donor-named academic building on the campus. Ernest E. Tschannen donated $9 million to the project—the single largest contribution to the university. Tschannen, a 93-year-old philanthropist who made his fortune in real estate, has made other mega-donations locally, including $38.5 million to UC Davis Health System for eye research and patient care, and $750,000 to the event and recreational center at Sac State.

The grand opening celebration for the Science Complex will take place Sept. 18 from 11 a.m. to 1 p.m. The building will be open for classes for fall semester. While the 96,631-square-foot complex will be the new advising center for natural science and mathematics majors, 90 percent of Sac State students will have classes in the new facility regardless of their major.