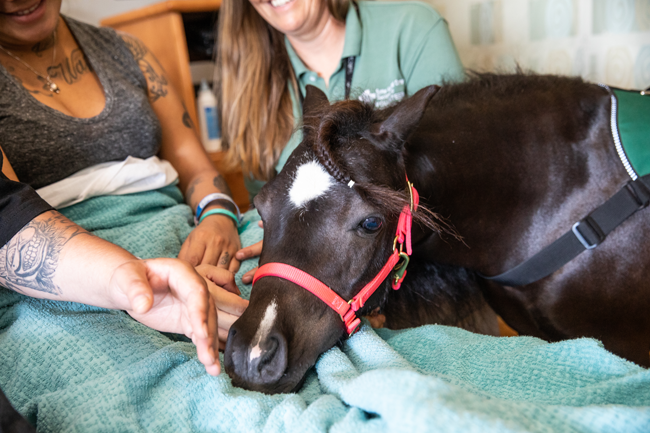 Pure amazement. That’s the reaction that Mel Welcher, an animal therapy volunteer at Sutter Medical Center, inevitably gets when she and Lilly, her miniature horse, roam the halls and poke into the waiting rooms of the health care facility. “Normally, they look at her thinking she’s a very large black dog, then they immediately go, ‘Oh my, there’s a horse in the hospital.’ It’s very entertaining to see a horse in that setting.”

Lilly is part of Sutter’s Hooves on Call program, an offshoot of its Paws on Call program in which cats and dogs visit patients who might need a little love or levity in their day.

Welcher has kept Lilly, now 8, at her Wilton ranch since she was 6 months old. At around 190 pounds and 33 inches at the shoulder, Lilly travels by minivan to her hospital gig, where she dons Build-A-Bear shoes—“She actually owns more pairs of shoes than I do,” says Welcher—to keep her from slipping, a vest and a volunteer badge.

Welcher, who visits the midtown hospital with Lilly twice monthly, is committed to the animal therapy mission. “It’s very difficult for me because it’s very emotional, but at the same time it’s cool because she’s bringing joy to someone,” says Welcher, who works in Sutter’s pharmacy department. “It takes patients’ minds off of what they’re dealing with at the moment. She brings smiles to pretty much everybody, which is why I do it.” 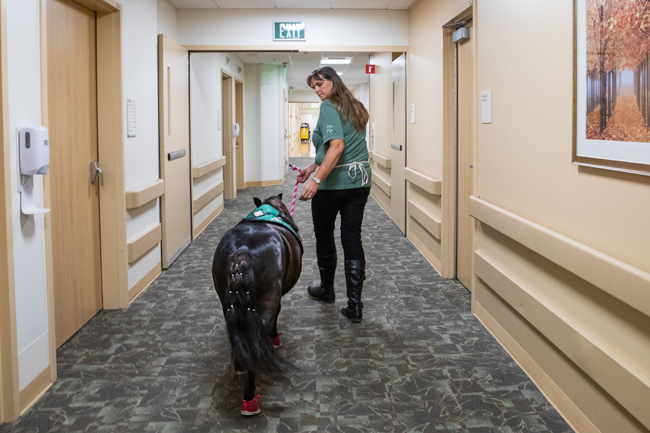 In fact, Lilly is known for being a bit of a ham, taking the covers off a patient’s bed during a room visit or, in a waiting area, nuzzling up next to a person’s cup of coffee as if she wants to drink from it. “She’s pretty hilarious,” says Welcher.

But this gentle animal has a serious side to her, too. According to her handler, Lilly is an empath with a knack for seeking out the patients who seem to need her affection most. “She can pick out the sickest person in the room every time,” says Welcher. “On one visit, she made a beeline for a young woman sitting in the corner of the room and put her head on her lap. I found out later that the woman had been diagnosed with a terminal illness. I think Lilly just knew.”

Even a short visit from Lilly and her four-legged colleagues can make a big difference in patients’ lives. “From what I have seen, this all-volunteer program is hugely beneficial for promoting healing,” says Welcher. “It makes being in the hospital much easier to tolerate.” 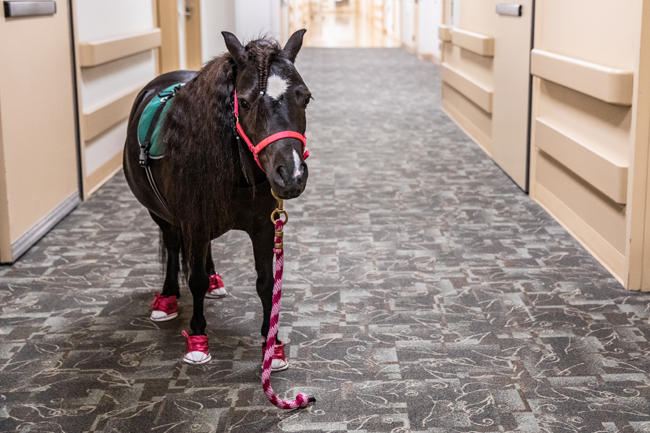