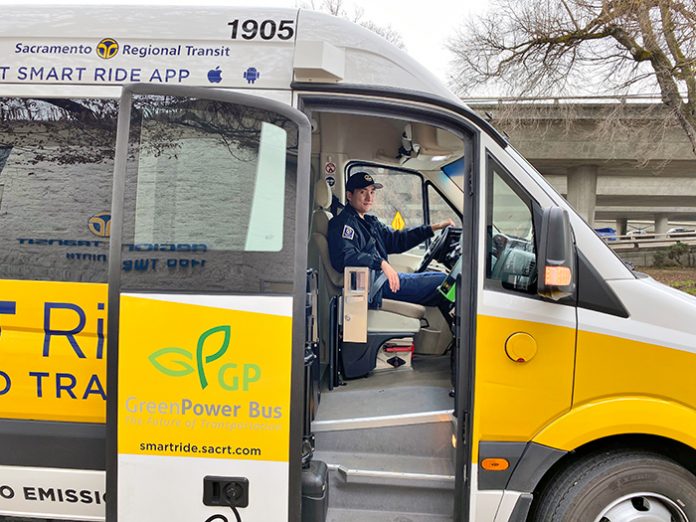 Say you want to be an environmentally sensitive, forward-looking citizen and use public transit, but the nearest bus or light-rail stop is farther away than you want to walk. Or maybe you suspect that once onboard a bus or train, you will encounter standing-room-only or some other irritation. Do you have an alternative?

If you want to travel around within one of nine Sacramento regional areas and are not in a hurry, the answer is yes. 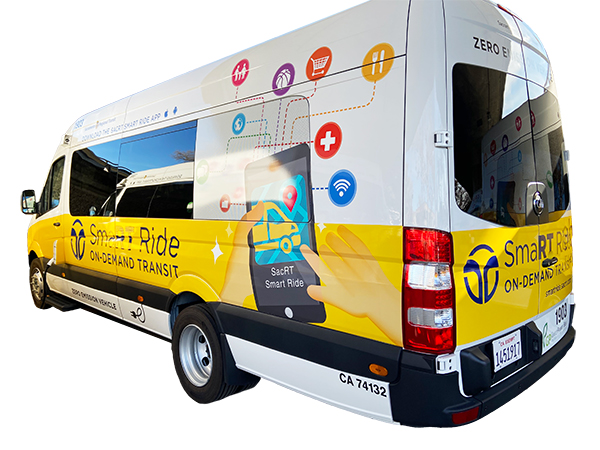 Customers can use an algorithm-driven free mobile app to request being picked up one or two blocks away. The app tells them the SmaRT Ride vehicle’s estimated time of arrival, and during the ride it maps out the vehicle’s progress, indicates where other pickups might occur, and estimates an arrival time. Fares are the same as for regular bus and light-rail service, $2.50 general and $1.25 for students and seniors one-way, plus there is a free option for a group of five or more riders who are going to the same destination.

In the workweek that followed Martin Luther King Jr. Day, I took SmaRT Ride from East Sacramento to my downtown job (a bit more than 3 miles away) three times, and back home once. I made morning reservations the moment that the app allowed me to, at 7 a.m. sharp. The four rides had similarities—only a couple of other riders, friendly drivers, comfortable seating—and the following differences. 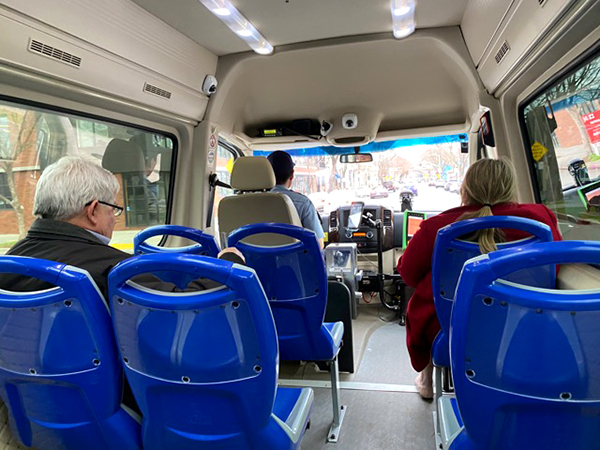 Tuesday morning: My first scheduled ride was abruptly and with no explanation, about 15 seconds after I agreed to it, canceled and I didn’t get picked up until 7:30. Due to two other people being dropped off before me and downtown’s one-way-street layout, the bus took me a full eight blocks past my workplace before circling back and dropping me off at 7:53.

Wednesday morning: The bus arrived at 7:09, went more or less directly to work and dropped me off at 7:21.

Thursday afternoon: When I reserved a spot to go home around 4 p.m., the app said pickup would be at 11th and N streets. However, the SmaRT Ride bus drove right past, hand-waving me to 12th and N, so I had to scurry to make it on time. (Bus drivers are instructed to wait up to two minutes for reserved riders.) Turns out the app changed the pickup location after my initial reservation, and I had not noticed.

Friday morning: An experience like Wednesday’s, and during which I had a few moments to talk with the driver. I asked if the newly expanded service triggered much feedback.

“Not yet,” he replied. “I try to tell people—I have a couple of people on board looking at their watch. ‘Can you drop me off here?’ ‘Can you do this?’ But I have to follow the policies. I tell them, and I’m very honest with them, that it doesn’t work for everyone. It’s a shared ride service and if you have to be somewhere at a certain time, then get on board early. Or go on Uber, or something. It doesn’t work for everyone.”

The people it seems to work best for, he said, “are working-class people in their 40s who have to get to work by 8 or 9, and they’re taking advantage. They’re pretty happy.”

The Details
The SmaRT Ride service, which is fully equipped to serve people with disabilities, is made possible through Measure A (a half-cent sales tax for transportation projects approved by voters in 2004) and a $12 million grant from the Sacramento Transportation Authority. Riders can make reservations via the free SmaRT Ride app, online or by phone. Find out more at sacrt.com/smartride.