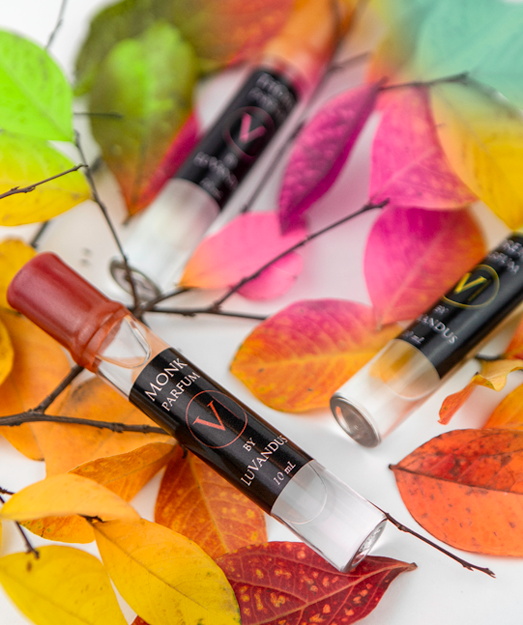 Local perfumer mixes molecules to create a unique fragrance for each customer.

Tyler Monk has an unusual job. He’s a nose, otherwise known as a perfumer. The 38-year-old Sacramentan makes a line of gender-neutral scents under the company name LuVandus. He also makes custom parfum: one-of-a-kind scents designed specifically for individual clients.

I recently visited Monk at his perfume lab in midtown to watch him create a custom fragrance for me. I worry that I’m perhaps not the best subject: I stopped wearing perfume in my mid-20s. (My boyfriend at the time was allergic.) I tell Monk that I used to wear Chanel No. 5, and occasionally Clinique’s Happy. “I can tell that you want to wear fragrance—you just haven’t found the right one yet,” he says. “I think there’s a fragrance monster inside of you that wants to come out.” 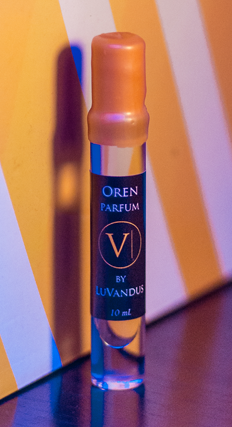 Monk and I perch on stools with a wood table between us. Behind him are five rows of glass shelves holding more than 145 small bottles. Each one contains a different “fragrance molecule,” or fragrant oil. There are floral molecules that smell like lily and food molecules that smell like grapefruit. There are other molecules that smell like desert salt, tobacco and leather. Monk grabs a handful of bottles and puts them on the table. Using a plastic pipette, he withdraws a little bit of liquid from the first bottle and places a drop on a paper scent strip. Holding the strip underneath my nose, I take a whiff. I’m not sure what it is. “Sherbet,” he tells me. The next drop is cantaloupe, followed by pink peppercorn. I reluctantly admit I’m not wowed by any of them. “You’ve got to guide me,” he says. “Don’t be afraid.”

The next drop is much more to my liking. It’s vanilla, a warm, custardy scent that brings me right back to a New England candle shop I used to visit with my mom when I was a little girl. Monk follows that up with pumpkin spice, which also meets with my approval. He asks me what I like to drink. Chardonnay, I say. He adds a drop of cognac molecule to the next scent strip. “It works with pumpkin spice for a warm, intoxicating smell,” he says. Monk follows that up with honey, then something that reminds me, weirdly, of Red Hots candy. (It’s actually spiced vanilla.) Then he drops something completely different on me. It smells like a cross between church incense and burning rubber tires. “I like to throw bizarre things at people—speed bumps,” he says. My speed bump is smoke. I pass.

We’re almost there, he says, handing me more scent strips. French black agar. Gin. Pear. Douglas fir. To my nose, the Doug fir smells unpleasantly like turpentine, but the next one—balsam fir—is heavenly. “You gravitate to the Christmas smells,” Monk says. “Do you love Christmas?” I do, I say.

Another scent that really appeals to me is marine layer. “It smells like the ocean,” I remark. “I love it.” “I think I’ve got you,” Monk says. He pulls out a leather notebook, opens up to a blank page and writes down my name, followed by a list of 10 fragrance molecules that met with my approval, including orange blossom, marine layer, balsam, myrrh and vanilla spice. Next to each molecule, he writes a number that corresponds with the number of drops he plans to use: five drops of one, 10 drops of another. He starts adding drops to a little beaker. Next, he adds a clear, thick liquid called humectant, which will enable the perfume to stick to my skin. Then he adds a diluent to thin the mixture. Finally, he adds perfumer’s grade alcohol and mixes it all with a glass stirrer. He places the mixture in a small tester and sprays some on a scent strip for my approval. I love it. It’s rounded and sweet, sophisticated, with a hint of ocean.

The process has taken about an hour. Monk pours the perfume into a 52-ml bottle, adds a spray top and a cap, and places it into a simple black box that reads “LuVandus Custom Composition.” On the box, he writes my initials, then his own. My custom perfume is complete, and I’m ready for my inner fragrance monster to come out.