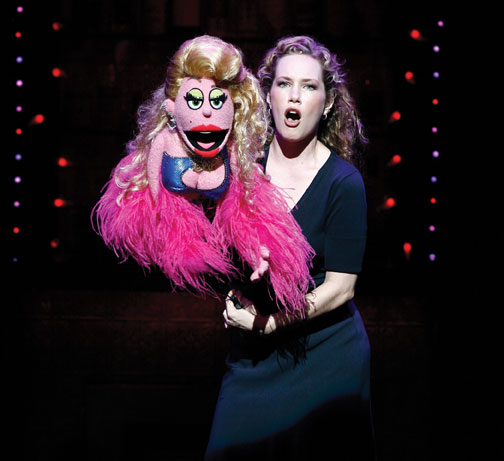 We scoured the coming season for some of the region’s most compelling theater, dance, music, lectures and comedy. Jot these down in your calendars—you won’t want to miss them.

1. Through Nov. 2: Wittenberg at the B Street Theatre

David Davalos’ 2008 play Wittenberg blends history with fiction as it captures the battle of wits between two Wittenberg University professors at the dawn of the Protestant Reformation. Dr. Faustus (a man of appetites) and Dr. Martin Luther (a man of faith) argue the value of reason versus faith as they guide the career of their student, a young Hamlet. Sacramento’s own David Pierini stars as Dr. Faustus in B Street’s production of this contemporary take on Renaissance themes.

Kate Gaffney, the willowy singer/songwriter with a voice wise beyond her years, celebrates the release of her long-awaited second album, The Coachman, with a performance at Harlow’s nightclub in midtown. The show offers locals a chance to glimpse the performer who some are calling Sacramento’s next notable export.

Performance-art pioneer Laurie Anderson returns to the Mondavi with her latest work, Homeland, a multimedia meditation on America’s obsessions with information, fear and freedom in the post-9/11 security state. Homeland is said to be the most technologically advanced of the many dazzling, path-blazing shows Anderson has written and performed since the early ’70s.

They don’t call Tina Turner the queen of rock ’n’ roll for nothing: Since the ’50s, she has sold nearly 200 million albums, making her the highest-selling female artist in history. Turner’s last tour—in 2000, when she was a youthful 60—was the fifth-largest American rock tour ever. And here she comes back, sure to shake and swagger and rule supreme one again.

David Sedaris, who New York magazine says “may be the most brilliantly witty New Yorker since Dorothy Parker,” comes to town to discuss his most recent best-seller, When You Are Engulfed in Flames. The third recipient of the Thurber Prize for American Humor (in 2001), Sedaris creates humor out of wry ruminations on himself, his family and society in books and on such programs as NPR’s “This American Life.”

Pop singer Linda Ronstadt launched her career in the mid-’60s in the first wave of country rock, but has since made 30 albums in a range of genres including rock ’n’ roll, folk and bluegrass, Broadway musicals and standards. She has won 11 Grammys and sold more than 100 million albums. Canciones de Mi Padre Viaje showcases the traditional mariachi music she learned from her father.

7. Dec. 6–24: The Sacramento Ballet’s The Nutcracker at the Community Center Theater

The Sacramento Ballet’s ever-popular holiday tradition enters its 21st year, with more than 400 child performers joining the ballet’s professional dancers to create the annual wonderland of music and movement that kicks off the Christmas season. The Sacramento Philharmonic once again provides live music. Bring the kids to Sunday matinees (Dec. 7 and 14) for juice and cookies with the cast after the show.

Five comedians of different religious persuasions—a Hindu (played by comedian Tapan Trivedi), a Christian, a Muslim, a Buddhist and, for balance, an atheist—walk into a bar . . . and . . . do shtick about religion. It’s all in fun, played for laughs, but what are we to make of the recent departure of the Jewish member, now replaced by a Buddhist comic? See the show to find out.

9. Jan. 14: Woodward and Bernstein at the Community Center Theater

Good timing will surely enliven the Sacramento visit by investigative reporters Bob Woodward and Carl Bernstein, of Watergate fame: They speak just six days before the end of the Bush presidency and the 2009 inauguration of the newly elected president. Brought to town by the Sacramento Speakers Series, the famed journalists share decades of experience watching the White House, so their thoughts on this night should be particularly intriguing.

Few people had heard the term feminism when Gloria Steinem first wryly wrote about her experiences as a Playboy bunny in 1963. Since then, the journalist, Ms. magazine founder/publisher and champion of women’s rights has grown into an activist elder stateswoman, respected as much for her strength in facing personal struggle as for her role in advocating for women, children, seniors and world peace.

In 1958, an Israeli violinist named Itzhak Perlman made his U.S. television debut on “The Ed Sullivan Show”—at the age of 13. In the 50 years since, Perlman has become the preeminent violinist of his time, adept at playing jazz and klezmer music in addition to the classical repertoire. The much-loved artist celebrates the golden anniversary
of his U.S. debut at the Mondavi with a special program.

Perhaps the edgiest of this year’s offerings by California Musical Theatre’s Broadway Sacramento series of touring shows, the multiple Tony Award-winning musical Avenue Q may take place on a set reminiscent of “Sesame Street,” but its subject matter is anything but toddler-friendly: The characters—Muppetlike puppets manipulated by live, singing actors—explore adult themes of sexuality, racial identity
and existential angst in graphic and engaging musical terms.

The Sacramento Philharmonic plays a series of concerts around the theme of American Stories, with performances at three venues: The Guild Theater in Oak Park, Magic Circle Theatre in Roseville and Temple Or Rishon in Orangevale. The highlight of the performance, which includes works by Aaron Copland and George Gershwin, is the West Coast premiere of Wynton Marsalis’ retelling of Igor Stravinsky’s The Soldier’s Tale, this time set in America’s cutthroat recording industry and titled A Fiddler’s Tale.

Guitarist and composer Bill Frisell, who won the 2005 Grammy for best contemporary jazz album, incorporates into his work virtually every form of American music of the past century, from John Phillip Souza to Muddy Waters to Madonna. Now he’s created a work based on Depression-era family and individual portraits of photographer Mike Disfarmer. A multimedia presentation, Musical Portraits From Heber Springs: Bill Frisell’s Disfarmer Project features Frisell along with bassist Viktor Krauss, guitarist Greg Leisz and violinist Jenny Scheinman.

The 1977 series of interviews on public television between former President Richard Nixon and British talk-show host David Frost provided screenwriter Peter Morgan (The Queen, The Last King of Scotland) considerable dramatic fodder for this hit Broadway drama, offered as part of California Musical Theatre’s Broadway Sacramento series. Frost cunningly elicits responses from the master politician, and actor Stacy Keach as Nixon takes off with the role of a lifetime.

Originally from Philadelphia, musician Kate Gaffney came to Sacramento by chance—and stayed on purpose. Gaffney fell in with a crew of young local songwriters including one Jackie Greene, who encouraged her songwriting and suggested she make it a career. Since then, Gaffney has been signed by Greene’s Sacramento label, Dig Music, and has formed a live band with members of local musical institution Mumbo Gumbo. On her second album, The Coachman, Gaffney turns out well-crafted songs about romantic strife and the life of a traveling musician, revealing her throaty, soulful voice. It’s set for release this month.

India-born comedian Tapan Trivedi discovered stand-up comedy after arriving in the U.S. at age 22. Since then, he has plied the comic trade throughout the country from his base in what he describes as his “adopted hometown,” Sacramento. Probably the funniest and best-known member of the Coexist? Comedy Tour—the Sacramento News & Review called him one of the best comedians in California—Trivedi has shared stages with funnymen Bobby Slayton, Dave Attell and others, making full use of his wonder at the strangeness of his new country, which he sums up in the exasperated catchphrase, “I can’t understand America!”

Maestro Michael Morgan has served as music director and conductor of the Sacramento Philharmonic Orchestra for the past eight years. A nationally known figure, he has studied and/or worked with such greats as Seiji Ozawa, Leonard Bernstein and Sir Georg Solti. Morgan teaches, conducts and performs (on piano) throughout the country from his home in Oakland. (He’s also been musical director of the Oakland East Bay Symphony for nearly 20 years.) Morgan has brought a high level of professionalism to area concerts in his Signature Series, which includes this year’s American Stories performances, showcasing works by Aaron Copland, George Gershwin and Wynton Marsalis.

Sacramento actor David Pierini, a presence on local stages for years, is currently an artistic associate at the B Street Theatre, where he appears this fall as Dr. Faustus in B Street’s production of David Davalos’ new play, Wittenberg. Pierini has acted in countless plays at the B Street (most recently in Sylvia), has written A Couch Story and The Adventures of Tom Sawyer, and directed Samuel Beckett’s Endgame. He also appeared in local filmmaker Joe Carnahan’s breakout film, Blood, Guts, Bullets and Octane, and did a turn on the NBC TV series “Ed.”

Debbie Soto will see nearly every one of the six shows in this season’s Broadway Sacramento series—along with 74 of her closest friends.

Seven years ago, when she booked tickets for 15 to 20 friends to see Seussical, The Musical, she found out that tickets bought for a group often bring a discount, and instead of the high surcharge individuals pay per ticket when they use online ticket sellers such as tickets.com, a large order of tickets can cost a mere $7 in service charges—for the whole order. Buying large blocks of tickets also can net you better seats, she discovered.

Soto, a trainer with the state Controller’s Office, uses an Excel spreadsheet to keep her bulk ticket buying organized. She doesn’t make a penny from the transactions, but receives great pleasure in making a night at the theater happen for friends.

“So many people tell me that they wouldn’t have gone and gotten tickets on their own, or gone alone,” she says. “So that gives me great joy to know that I gave them the opportunity.”